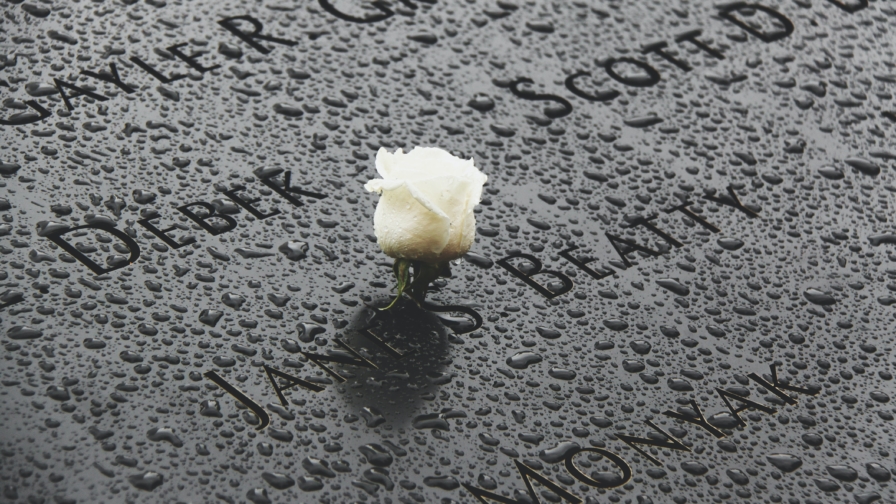 Over the past several years, I have found myself reflecting on how we remember 9/11, the phrase “We will never forget” that often accompanies 9/11 events, and the purpose of public reflections in general.

Specifically, I have wondered if we are clear about what are called on to remember. And why.

If you were alive in the United States on September 11th, 2001, it is likely that you remember where you were and what you were doing when you heard the news or saw the images that were to become part of our national consciousness.  I was living in Oak Run, playing with my two-year old daughter on the floor of our small home when our neighbor Sophia called to tell us to turn on our tv, a small black and white job that only got two channels.

You might remember the ways in which commentators and leaders struggled to piece together information, the fear and uncertainty of the days and weeks to follow.  You might reflect upon the heroism and commitment of first responders and those who cooked, cleaned, dispatched, supported, worked on utilities, ran public health systems, and otherwise made the work of first responders possible.

Depending on how you tuned in, you may have heard stories of neighbor helping neighbors, learned about the lives and families of people of all ages lost in the bombing, and felt the outpouring of support from nations whose citizens knew what it was like to experience large scale attacks on their own land.  You might also have memories of calls for retaliation, seen the preparation for war, heard phrases like axis of evil and weapons of mass destruction repeated over and over.

Without a specific call to reflection, commemorations of September 11th can seem to focus on the attack itself, with US flags marking the deaths of the 2977 who died that day, 372 of whom were citizens of 90 other nations.

What we focus on publicly matters; it shapes the understanding that informs our response to future challenges and tragedies.  We strengthen what we choose to remember this has consequences for our ability to examine present dynamics from a wider, historical perspective informed by the diverse experiences of those who lived through that period.  Our collective wisdom.

As we cycle through holidays and commemorations, we often hear voices that ask us to come back to purpose, why we gather.  Veterans remind us of the reason for Veterans and Memorial days; Christian churches remind people of “the reason for the Christmas season”; groups ask us, on Dr. Martin Luther King Day or Cesar Chavez Day, to engage in community service.

Sometimes it is clear that the purpose of remembering is to honor.  Kelda Britton, in her recent Shasta Scout article, describes two cultural practices, the Nome Cult Walk and the Return of the Ancestors, that provide a way to remember what happened during forced military relocations of Native people here in California and also a way to “honor the memory of those ancestors and what they sacrificed for us to be here today.”  To honor is to hold in high respect; in the public sphere, such honoring is often accompanied by gratitude, sometimes by grieving, and occasionally by calls to step up to the legacy we have been gifted.

In some places, the purpose of remembering is reconciliation, a committed step towards reckoning with the past together in order to heal as a community or nation.  Efforts aimed at truth and reconciliation, like ones that have been initiated in Australia, South Africa, Rwanda, are recognitions of what is required to work together for a better future for everyone: ongoing dialogue, grappling with history, consideration of the ethical imperatives of current and future actions.

The act of remembering in itself also assigns importance.  The decision to commemorate or not commemorate is political, regardless of whether we assign a day as a federal or state holiday.  This country has seen vigorous debates over Martin Luther King and Cesar Chavez days in the past.  We witness similar tensions surrounding community discussions of what should be commemorated in October, Indigenous Peoples Day or Columbus Day or both.  Such conversations are important.   They have the potential to bring clarity to our public actions and commitments and to examine the consequences of those commitments.

In this era of information silos and distrust of sources that seem to offer political views different from our own, the purpose of remembrance can also be to assert that events actually happened and that they were significant.  The dynamics behind denials of widely documented events such as September 11th, the Holocaust, and the violence of the January 6th insurrection, is beyond the scope of this article.  Concerted efforts to rewrite history exist now, have existed in the past, and shape efforts to remember even the recent past.

Growing up outside of New Orleans, I knew this dynamic well: the Civil War was called the war of Northern Aggression (“northerners” being anyone not from the deep south). The war was said to have been about state’s rights or economic “independence”, not so much about upholding the institution of slavery.  Others focused on promoting the idea that not all who bought and sold people were physically violent enforcers of enslavement, advancing this as a credible defense against engaging in the pain of examining the real costs of history.

We cannot face or learn from what we deny completely or ignore; this is true on a personal level (such as a loved one’s addiction) and it is true on a societal level.

We seem to get stuck in places like this, wanting to deny what was or has been so that we don’t have to reckon with the consequences or with what it means to see the past with new eyes. We cannot change the harmful actions, ideologies, practices, policies, that occurred in the past- the origins of policing that continue to beleaguer the profession; the laws that discriminated, oppressed, or disadvantaged people based on race, sex, income, geographic location. We cannot change the fact that such things happened in places where we live or where we grew up, or our relation to those who actively created or supported actions we now find abhorrent, illegal. The actions of the distant past are not ones that we, as individuals, had an opportunity to influence. And yet, if what happened- in our nation, on Linden Street here in Redding- are truly not in keeping with our understanding of who we want to be, then we are left with the decision to change the present for a better future or to reinforce the past.

The truth is, if we don’t intentionally work for something different, we are complicit in holding up structures and practices that emerged from the past.

Despite our silos, it seems like those on the right and left agree that some of the ways in which we’re handling public dialogue and grievances right now isn’t working that well.  Perhaps we share, too, a desire to live fully and well in the company of those we love, who are also able to live fully and well.  Maybe this desire is at the very center of the claims we stake, distorted by a sense that your well-being comes at the expense of mine.

And this is why we should reflect on what our remembrance of the past means for our present and future.

What we choose to ignore, omit, or revise leaves its own particular legacy and consequences.  It is hard to find the honor and loyalty in denying the fact of deep harm or of attempting to distance ourselves from past events.  The past two years, in particular, have brought into unavoidable, stark relief the fruits of resistance to acknowledging the existence and operation of racism. It isn’t pretty, and we could do something different. We could engage in the process of public reflection so the purpose of listening, learning, and healing. Together.

Sharon Brisolara holds a masters in Human Service Administration and a PhD in Program Evaluation and Planning, with concentrations in Rural Sociology and Women’s Studies, both from Cornell University. She is an educator, writer, program evaluator, and Resilience and Equity Coach. Her monthly Op-Ed column for Shasta Scout discusses the equity challenges facing our community through a variety of lenses including poetry, research, resilience coaching, and sociology.

Do you have a question or comment?  Sharon will be part of the community conversation at Shasta Scout’s Facebook page. Join us there!

ConnectGen is appealing a June denial of the controversial energy project by the Shasta County Planning Commission. They say their newly proposed modifications will reduce the scope of the project and provide “enhanced benefits” to the Pit River Tribe, which continues to oppose the project.

The proposal from Populous, K2, Turtle Bay and McConnell to buy prime riverfront land will be discussed as part of an open session of Tuesday’s City Council meeting. At that meeting the Council could decide to enter into a non-binding agreement with developers or declare almost 200 acres of riverfront land surplus.