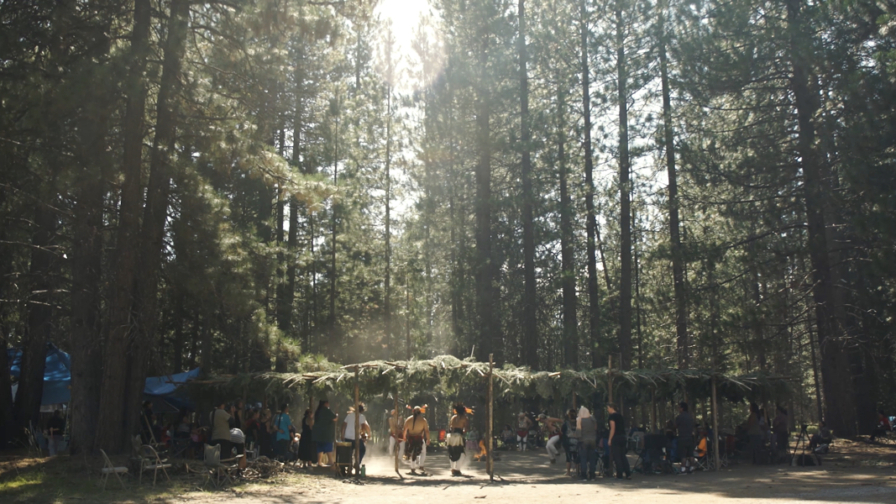 Winnemem Wintu Tribal Member Michael “Pom” Preston is the co-director of a recent short documentary that has screened in more than 15 countries. One Word Sawalmem offers powerful Indigenous lessons about our relationship to water during a time of extreme drought. It’s currently available to stream online for free.

As a Winnemem Wintu tribal member and ceremonial dancer, Michael “Pom” Preston grew up immersed in the ethics, science and spiritual beliefs that govern how his people relate to the natural world. But despite his tribe’s ecological wisdom, Preston says, attending UC-Berkeley as an undergraduate in environmental studies was often an alienating experience.

Discussing that experience in the opening scenes of the 18-minute short documentary One Word Sawalmem, Preston explains: “In many of my classes, I was the only one representing that (Winnemem Wintu) world view. . . I was the only one talking about the sacred, I was trying to explain in academic language how one relates to the ecosystem and protects it.”

Preston is a member of the Winnemem Wintu Tribe, the Indigenous people of what is now known as the McCloud River (or Winnemem Waywaket), which flows for more than 77 miles in Siskiyou and Shasta Counties.

The film he co-directed with veteran filmmaker Natasha Deganello Giraudie has garnered awards and been screened at film festivals around the world since its release in March 2020.

The film’s title, Sawalmem, is a phrase that translates to “sacred water,” but its real meaning incorporates much more, Preston explains in the documentary. Rather than treating water as an inanimate resource or a commodity, Winnemem Wintu people see water as a powerful being with intelligence and agency, which they are supposed to treat with reverence, respect and care. They have a responsibility to take care of their ancestral watershed, and in return it will take care of them.

At a time when humanity faces a multitude of challenges from climate change, including drought, Preston and Deganello Giraudie say people need to make a conscious shift in how they relate to the natural world, and their film serves as an invitation to consider how Winnemem Wintu people relate to water.

They say that the film has never been more relevant as state and federal officials warn about severe water shortages due to the worst drought in more than 1200 years.

The Winnemem Wintu world view contrasts greatly with Western theories about environmental management, which often focus on the control and manipulation of rivers, waterways and fisheries, as evidenced by California’s complicated networks of mega-dams and pipelines that divert river flows throughout the state.

While the massive engineering of California’s rivers has supported the development of an incredibly profitable agricultural economy in arid regions like the Central Valley, it has come with extreme costs, especially to ecosystems, traditional food sources and Indigenous peoples.

The Winnemem Wintu people have firsthand experience with the destructive impacts of dams. When the 600-foot Shasta Dam was constructed during World War II, federal authorities removed them from their homes along the McCloud River, which were later submerged beneath Shasta reservoir. And since the early 2000s, the tribe has been fighting the U.S. Bureau of Reclamation’s proposal to raise Shasta Dam an additional 18.5 feet, which would flood or damage at least 40 Winnemem Wintu sacred sites that are still used for ceremonies and religious practices.

A 2000 World Commission on Dams report estimated somewhere between 40 to 80 million people have been displaced by dams worldwide.

“The film is really a challenge to that ideology that led to all these dams,” Preston said. “It’s been hundreds of years of losing ‘sacred water’ as a concept, and we’re trying to bring it back. We’re trying to get people to rethink what it means to be human.”

“The problem when you’re using more water than what’s allocated for you, when you try to hack nature to extract more, it’s going to catch up with you . . .,” Deganello Giraudie said. “Some people might think listening to Indigenous wisdom means going backwards, but really it’s about getting back on track to being in a good relationship with nature, which means living within your means.”

While the spirituality, science and philosophy of every Indigenous society is unique, “traditional ecological knowledge” or TEK has become an overarching term to describe the type of Indigenous ancestral wisdom that is explored in One Word Sawalmem.

While it’s not an easy term to define, TEK usually refers to the evolving knowledge that Native peoples acquired over thousands of years of observing, interacting with and living within the natural world, that is passed down from generation to generation. TEK is knowledge based in place and the Winnemem Wintu’s knowledge is most applicable to the McCloud River, their ancestral watershed where they’ve lived for millennia prior to Shasta Dam.

In recent months, the state of California has made strides in legally recognizing the vitality of Traditional Ecological Knowledge, especially in how tribes may play an important role in curbing catastrophic wildfires through the restoration of cultural burning practices.

Preston and Deganello Giraudie say they’ve been surprised that the message of the film has resonated so deeply with audiences across the globe. The film really resonated with young people, they said, but also with farmers, water scientists, college students, Indigenous elders and various people of different backgrounds. It’s been screened at more than 45 film festivals in more than 15 countries and was shown at the Smithsonian’s National Museum of the American Indian in Washington D.C.

In Peru, where the film was shown at a United Nations Indigenous language event in Cusco, some Indigenous attendees were so moved by the film that they worked with Deganello Giraudie and Preston to translate it into Quechan, the Indigenous language of the Peruvian Andes. Giraude said they believed the film will inspire and build the self-esteem of Indigenous youth, who could relate to Pom’s story.

Deganello Giraudie said the success of this film, and others, indicate there’s a real hunger for Indigneous knowledge. “I think people are realizing that Native and Indigenous perspectives have been missing from the table, and because of this there’s an imbalance in the world,” she said.

Preston agreed, saying the film changed a lot of people’s understandings about the sacred, about spirituality, about water and about Native peoples themselves.

One Word Sawalmem is the latest well-received documentary in what’s becoming a rich tradition of Indigenous filmmaking in what is now Shasta County. In 2012, Dancing Salmon Home, a documentary about the Winnemem Wintu Tribe’s efforts to return salmon to the McCloud River, won the 2012 American Indian Film Festival and screened at film festivals throughout the country. Local filmmaker and journalist Sky Scholfield is also currently in production of the Pit River Tribe Documentary Project, which builds upon the the highly lauded 47 Cents an Acre (1973) and The Dispossessed (1970) documentaries about the Pit River Tribe’s fights for land rights. The Redding Rancheria has also produced a documentary about its history called With the Strength of Our Ancestors.

The documentary One Word Sawalmem is currently streaming for free online with an email registration. You can watch it here.

Portion of a Map from the City of Redding’s General Plan, 2020.

A focus group of 12 stakeholders has met biweekly over the last four months to provide advice on how the Community Development and Design subsection of Redding’s General Plan will be updated. The plan broadly addresses land use in the city, including how the Sacramento River and the riverfront can best be utilized by the community. Half of the city’s chosen community stakeholders are architects, builders or developers.