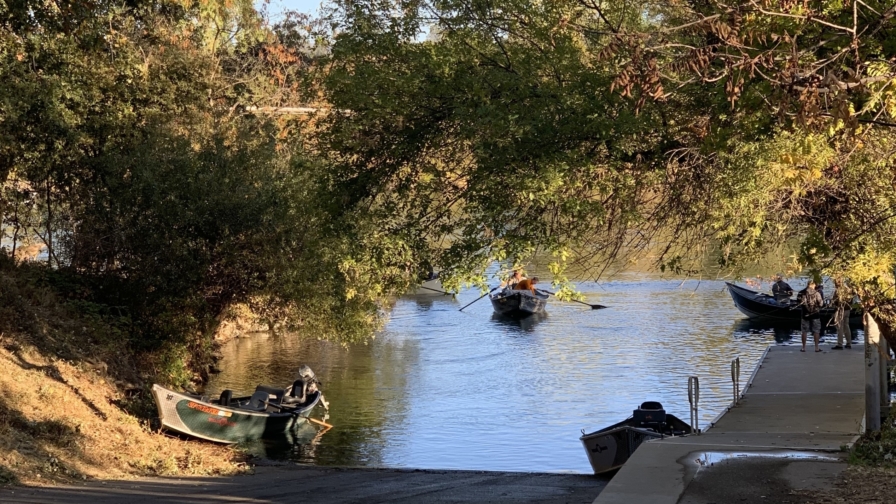 Engaging the Community in Proposed Riverfront Development: How It Started, How It’s Going

A series of public workshops, surveys and social media posts by the city haven’t reassured many community members that they’re being included in the riverfront planning process. Shasta Scout looked at how the city’s process compares with best practices in community engagement.

On Thursday evening, the Redding City Council will hold their last public workshop to discuss potential development of key riverfront land. The workshops were scheduled after a consortium known as the D&D group, that includes locally-based K2 Development Companies and Missouri-based Populous, as well as the McConnell Foundation and Turtle Bay Exploration Park, submitted a proposal to the city.

They’ve asked the city to sign a non-binding exclusive negotiating agreement allowing them to masterplan, purchase, and develop riverfront land that includes the Redding Civic Auditorium and Redding Rodeo grounds. In early September, Shasta Scout revealed that their proposal to develop that land was scheduled to be heard in a closed council meeting, without public comment. After swift public outcry, the council removed the proposal from the closed-session agenda, and voted to hold a series of public workshops on the topic.

During public workshops, the D&D group has repeatedly told residents they will facilitate strong community engagement in the project if they are chosen to develop riverfront land. But many community members have indicated that they don’t want the city signing on to a development project before the community has a chance to shape what form that development will take. Some residents say that an inclusive planning process that takes into consideration the needs of the full community should be completed by the city itself, before any development agreement with an outside party is considered.

Cameron Middleton, who spoke at the November 10 workshop as a representative of the Asphalt Cowboys, and who is also a Redding Planning Commissioner, asked the city for “something more concrete” than “input.” He said entering into an exclusive agreement to grant control of the land to developers prior to a fuller community planning process was problematic. “Unfortunately,” Middleton said, “input can be, and unfortunately often will be, overlooked.”

Shasta County resident Jonathon Freeman shared similar concerns. He said he feels the planning process “has greased the chute,” because the workshops have been focused not on whether the city should develop riverfront property but on how they should develop it. Freeman shared with the council the difference between processes that incorporate consent and those that only utilize consultation. “Entering into an exclusive agreement (for riverfront land) eliminates the opportunity for (the community’s) consent,” Freeman said. He reminded the council of the Dawes Act of 1887 which the U.S. government used to divide up collectively held Indigenous land into individual allotments as a means of destroying Indigenous communities. The Dawes act reminds us, Freeman said, that the process of land planning can be used to bring communities together, or divide them.

Another local resident, Steve Kohn, shared similar concerns, telling the council: “Populous and D&D would love to get that negotiation agreement right now, but we have no idea what they want to do. At the very least, what I’d like to see is some guarantees that certain things would be involved in the project.”

Radley Davis (Pit River) said the public workshops seem “co-led by developers to tell us how it’s going to be done.” He told the Council, “My request would be to extend community input. Because there is more community that needs to be aware of this project, that can offer guidance about what is really needed here in Redding, and why public property is valuable to keep public.”

Michael Lockwood, a Senior Principal with Populous, grew up in Redding. During an interview a few weeks ago he told Shasta Scout one of the advantages that the D&D group brings to the city is the money to fund a master planning process. “There’s all these great ideas (in the community),” Lockwood said, “but very few of them have come to fruition.” That often happens, Lockwood said, because the financing to not only design new projects, but to bring them to life, is often missing at the municipal level. Development like what’s possible at the riverfront, Lockwood said, often requires a public-private partnership, or a very committed group in the private sector.

City Manager Barry Tippin and council members did not respond to a request several weeks ago asking whether they believe current workshops and surveys offered by the city are providing the kind of “robust dialogue” the city has acknowledged the community is seeking. Some community leaders who approached Shasta Scout have said the current community engagement processes don’t allow for anonymous comments. Others are concerned about the formal nature of in-person council workshops that center staff voices. And some object to the tone of city surveys, which solicit only limited public input.

So far none of the engagement mechanisms have invited the community to dream or imagine beyond the current proposal, about whether they’d like the riverfront to remain as it is or change in some way. But that kind of broader and more inclusive process is exactly what planning experts say is needed to inform the public, identify their ideas, improve local decision-making, and build trust in government.

Those experts include the International Association for Public Participation, which has identified seven core values that have been shown to create the most successful and respected planning processes.  Those values include involving the public in how they will participate in planning, promising the public that their contribution will influence decisions, and seeking out and facilitating the involvement of those affected by the decision.

The Institute for Local Government (ILG), a non-profit that works with the League of California Cities, says cities should use public engagement processes to seek to generate perspectives that shape decisions, rather than persuade residents to accept a decision that’s already been made.

They also call on local governments to document and seriously consider ideas, preferences and recommendations received by the public as part of effective and ethical public engagement. So far, the city has not publicly documented community responses to surveys, or comments that have been received at workshops, or by email, but City Manager Barry Tippin told Shasta Scout the city’s communication team hoped to make public comment available on the city’s website soon.

Engage Roseville, is an example offered by ILG of the kind of community engagement the group supports. That project was an 18-month initiative developed to encourage public participation in the city of Roseville’s budget processes. Among other engagement efforts, residents were given fact sheets and participated in a Community Conversation event. Live surveys were administered during the event and survey results were provided to all community members.

At least one Redding city leader is looking at a similar process. At last week’s Community Services Advisory Commission meeting Kim Niemer presented a plan to promote deep community engagement around a possible redevelopment of South City Park. Prior to any city planning for the space, Niemer said, including the community could involve multiple virtual meetings, an extended community survey that helps residents rank their concerns dreams connected to the space, and an on-site brainstorming session.

Community planner Monique Lopez, founder of Pueblo Planning, a non-profit that works to center the voices of community members as experts, says focusing on the needs of the most vulnerable, rather than those who are quickest to speak up or easiest to reach, will improve circumstances for everyone. Community planning should also include repairing past harms, Lopez says. State laws and executive orders outlining how agencies should consult with California tribes about developments in their ancestral lands are designed to address past harms.

Wintu leaders and activists have told Shasta Scout that the area now known as Turtle Bay is rich with cultural resources. Some have also expressed disappointment in the lack of tribal consultation thus far in the process.
While tribal consultation isn’t legally required until an environmental review process begins, the Santa Rosa-based National Indian Justice Center advise involving tribes early in planning processes and not using consultation to convince tribes to accept a proposal that’s already been developed.

Past harms were also on the mind of Jess Rouse (Pit River, Wintu and Hupa), when she spoke at the November 10 council meeting. Rouse said she is one of only a handful of Indigenous basket makers left locally. Gathering the plants necessary for basket making can be challenging due to the local history of dispossession of Native peoples. And privatizing land may make gathering inaccessible or even criminalize it. That’s one more reason why locals like Rouse worry about community access.

“Those rivers are what I gather on, those rivers are where we fish, that river land is where my ancestors are buried,” Rouse said. “I think our public lands should stay in public hands . . . we want our lands to remain the way they are.”

The council is expected to vote on next steps for riverfront development this Thursday, November 18.  Public comment is welcome at that meeting. You can contact the Redding City Council here.

“You Cannot Sell What Is Not Yours”: Indigenous Peoples Say Their Voices Should Be Central in Riverfront Discussions

Native people presented a united front against selling riverfront land to private developers at Thursday’s Redding City Council riverfront development workshop. They invoked their responsibility to protect their homelands and the remains of their ancestors and pledged to prevent further erasure.