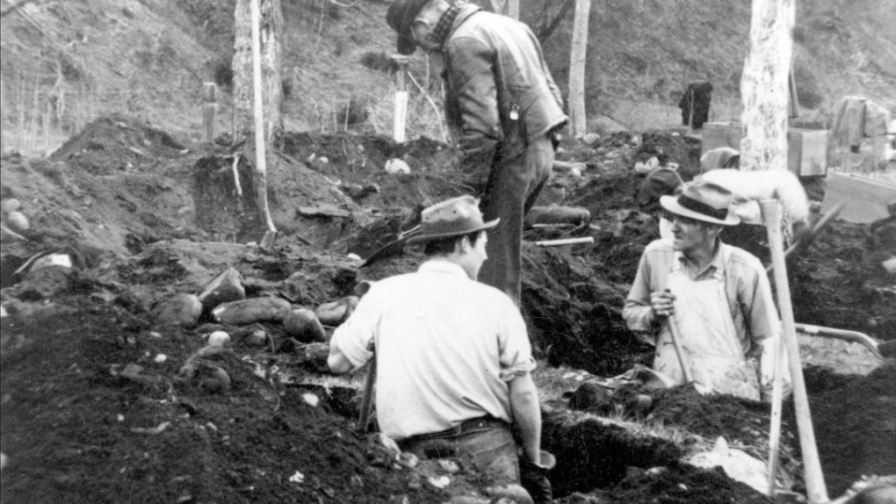 The incident occurred a little over a week ago, just a few days before Wintu people and leaders expressed opposition to a riverfront development proposal, in part due to fears it would disturb the graves of their ancestors. Turtle Bay Exploration Park staff say they already have measures in place to protect Native burial sites but they’re discussing how to improve their processes.

Editor’s note: Out of respect for the Native community we have not described specific locations of ancestral remains, or items that may be buried with those remains, to better ensure their protection.

Native educator April Carmelo was walking around Turtle Bay with her 9-year-old daughter and small dog, on Sunday, November 14, when she was startled to see two men digging near what she knew to be the resting place of Wintu ancestors.

Carmelo says when she yelled at them to leave, one responded that they were looking for a specific Wintu cultural item to make a “pendant” for their mother. Even though she was alone and had left her bear spray in her car, Carmelo didn’t back down. She says she quickly snapped photos of the two men on her phone and shouted to scare them off: “Those are my relatives … You get the hell out of there!”

The events were witnessed by another pair of pedestrians, Carmelo says, who captured photos of the men’s vehicle and license plates after she chased the alleged grave robbers from the area. Carmelo said she provided her account, along with photos of the two men and their vehicles and license plates, to Turtle Bay security, who filed a report with the Redding Police Department.

Carmelo, who is a citizen of the Greenville Rancheria and of Wintu, Maidu, Tongva, and Ajcachemen descent, found the incident deeply disturbing. When she saw what was happening, she said, she felt “a spirit moving” inside her that spurred her to act. “We may not know the names of the people buried there, but we still feel connected to them,” Carmelo said. “I still feel a lot of emotions when I walk by there. I felt like, ‘Who is going to defend them if I don’t defend them? Who’s going to stand up for them?’”

In many Indigenous belief systems, the desecration of burial sites is taboo and may lead to harmful spiritual repercussions. Many Indigenous people also feel a strong connection to their ancestors, even those who lived millennia ago. They often have a sense of duty to uphold their tribal responsibilities on behalf of their ancestors and of gratitude for what their ancestors endured to pass their traditions down to future generations. And while it’s taboo in most cultures to rob graves or disturb burial sites, the historical discrimination and dehumanization of Native Americans has contributed to the ongoing desecration of Native ancestral graves causing pain and trauma for many in the Native community.

“What if the tables were turned and it was your grandmother or your grandfather they were digging up?” Carmelo said.

For decades, professional and amateur archaeologists have collected the remains of Native ancestors from massacre sites and burial grounds that were left vulnerable by the removal of Indigenous peoples. A 1941 Associated Press article reported that University of California “excavators” traveled to the McCloud River to steal Winnemem Wintu funerary items as the tribe was being removed from their homes during the construction of Shasta Dam.

By the time the 1990 Native American Graves Protection and Repatriation Act (NAGPRA) was passed, museums around the United States had already accumulated a collection of approximately 300,000 to 2.5 million remains of Indigenous ancestors, as well as millions of cultural objects. Around that time, Native scholars and activists noted that the common use of terms by anthropologists like “crania,” “bones,” and “skeletal remains” were dehumanizing. They successfully moved to alter the terminology to “human remains” or “ancestors.”

NAGPRA, along with several California state laws, provide some legal protections against the desecration of ancestors’ burial sites and of the trafficking of human remains and funerary items. But UC-Berkeley Assistant Professor Peter Nelson, a tribal citizen of the Federated Indians of Graton Rancheria and an expert in Indigenous archaeology, says that Indigenous burial sites remain extremely vulnerable. He says protecting them is an overwhelming and exhausting job, especially for tribes without federal recognition or the resources that recognition brings.

“It’s really a constant threat,” Nelson said “Especially in urban areas. It takes a full staff of people to monitor these projects (to protect burial sites), but a lot of unrecognized tribes have to do it all as volunteer work because they don’t have the resources of recognized tribes, especially those with gaming revenues,” he said. “On the spiritual side, you’re constantly making compromises as a tribal person about how you would traditionally deal with these situations.”

Wintu and Native people voiced concerns about ancestral graves at a City of Redding workshop held just four days after Carmelo interrupted grave robbers near Turtle Bay. The council held the workshop to discuss a proposal by the D&D group, a consortium of nonprofits and developers to develop about 45 acres of riverfront land that includes the Redding Civic Auditorium and Redding Rodeo grounds. The D&D group has asked the city to sign a non-binding, exclusive negotiating agreement allowing them to masterplan, purchase, and develop about 45 acres of riverfront land. The council has not yet decided whether to enter into that agreement.

Native people’s concerns about riverfront development, and their insistence that they should be considered stakeholders in any development process, centers in part on protecting burial sites. Wintu leaders and activists have repeatedly said at public meetings and in interviews with Shasta Scout that both sides of the river at Turtle Bay are rich with cultural resources and contain village sites, as well as their ancestors’ resting places.

But even without that development, Native people are already frustrated by what they see as local agencies and landowners’ ongoing failure to protect their ancestors’ remains.

“Enough is enough,” Carmelo said in an interview with Scout. “You have everything else we had. All we have are our graveyards … If you don’t want to protect them, then give (our land) back.”

Julia Pennington Cronin, an archaeologist by training and Turtle Bay’s Curator of Collections and Exhibits, told Shasta Scout this week she was angered when she heard about the recent grave robbing attempt. During the 50s, 60s, and 70s, she said, it was common for people to dig up graves and steal remains and cultural items from Wintu people’s ancestors around Turtle Bay. Since then, museum staff have collaborated with Wintu people to erect barricades around sensitive sites and develop a plan to protect them, she explained. Wintu cultural leaders are notified immediately when there is a disturbance that requires staff to enter the area, Pennington Cronin said, and Wintu cultural monitors are present for any ground disturbing work. Native American cultural monitors are often present at construction sites, archaeological excavations and other development projects that might disturb sensitive cultural areas. Monitors advise where to avoid ground-disturbing activities and provide guidance on how to handle inadvertent discoveries of human remains or cultural items.

But Carmelo says she worries about how easily the men were able to scale the existing barricade and how difficult it was for her to find a way to contact security when she saw what was happening. “It’s not as secure as they’d like to believe,” Carmelo said. “There are no call boxes … Those two men could have attacked me.”

Increased signage to protect areas with tribal remains is complicated by concerns that this could increase interest by those seeking to illegally obtain artifacts. In order to work through such complexities, Carmelo said, continual and meaningful conversation with local tribes on this issue is extremely important. She urged Turtle Bay and other agencies responsible for protecting Indigenous burial sites to ensure they’re fully in compliance with laws protecting Indigenous remains and have robust security policies to protect them.

Pennington Cronin is the primary contact for Wintu people for museum programs and exhibits. She said she would like to install more security cameras around the River Trail as well as the parking lot but jurisdictional issues complicate matters. She said the Arboretum is McConnell Foundation land, leased by Turtle Bay Exploration Park, while the Sacramento River Trail is City of Redding property. And by agreement with the city, Turtle Bay security isn’t supposed to patrol public property, she said, except the Sundial Bridge.

But Pennington Cronin indicated that the reported grave robbing incident has spurred internal conversations among Turtle Bay staff about what improvements to security can be made. Emphasizing the illegality of grave excavation, Pennington Cronin said, “We have to work with the city to get cameras up (on the river trail) that can be monitored.”  In the meantime, she urged community members to keep their “eyes peeled” for potential grave robbers around the Turtle Bay grounds saying, “We need to help Wintu people protect the culture that’s here.”

California’s Public Resources Code requires landowners to ensure the area around Native burial sites is protected in accordance with both archaeological standards and cultural standards — in this case the cultural standards of the Wintu people. In 2001, California also passed its own Cal-NAGPRA law that extended the protections to historical California tribes who’ve been denied federal recognition by the Bureau of Indian Affairs, including the Wintu tribes.

Scholars agree the laws that protect Native burial sites are necessary because the historical dehumanization of Indigenous peoples’ ancestors has never been fully addressed. The modern desecration of Indigenous remains is often traced to the 19th century, when American physician and writer Samuel Morton popularized the pseudoscience known as phrenology. Morton collected the skulls of Indigenous peoples’ ancestors in attempts to  prove his theory that studying human crania would provide evidence of Europeans’ racial superiority. At one point, the Smithsonian’s collections contained thousands of Native American skulls gathered by Morton, who often bought them from soldiers and other officials.

Nelson said early archaeologists assumed white scientists had an inherent right to possess and study Native people’s bodies, lands, and cultures. The same mentality often exists among professionals who skirt laws like NAGPRA or criminals who rob Native burial sites, he said. The historical mistreatment of Native people’s remains and the tradition of raiding them for valuable cultural items continues to this day among amateur collectors and treasure seekers.

Carmelo says the two men she confronted told her that property they were stealing from the graves “’belonged to the community’ … they acted as if they could do whatever they want, take whatever they want,” Carmelo said. She added that Turtle Bay, the City of Redding, and the McConnell Foundation should have full-time tribal liaisons in order to promote stronger consultation and relationships with local tribes, whose ancestors they’re responsible for protecting.

“We demand the agencies do a better job to protect them. Why? It’s the right thing to do,” she said.

Do you have a correction to this story? Let us know here.

“You Cannot Sell What Is Not Yours”: Indigenous Peoples Say Their Voices Should Be Central in Riverfront Discussions

Native people presented a united front against selling riverfront land to private developers at Thursday’s Redding City Council riverfront development workshop. They invoked their responsibility to protect their homelands and the remains of their ancestors and pledged to prevent further erasure.

New lease terms will be discussed by the Redding City Council on Tuesday. Terms call for a significant reduction in rent and a ten-year lease. Bethel Church, Redding’s controversial megachurch, started Advance Redding and serves as its anchor tenant for the Civic.