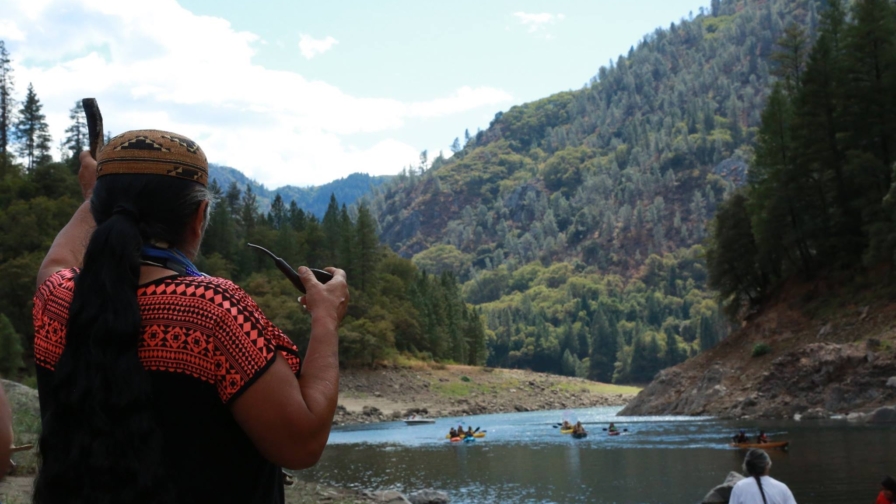 Winnemem Wintu people bless kayakers who completed the Run4Salmon prayer journey during a ceremony on the McCloud River in 2017. Photo by Marc Dadigan.
News: Indigenous Affairs

The brief has been submitted as part of an appeal in a case that addresses California’s entrenched water rights system, which prioritizes those who claimed water first, sometimes at the expense of those who need it most. The Winnemem Wintu Tribe argue the current system harms not only California waterways but also tribes, who’ve been historically excluded from claiming water rights.

Correction: 2.12.22 An earlier addition of the water rights timeline included in this article incorrectly cited the date of the Reclamation Act. We have corrected our mistake.

State-sponsored violence and discriminatory laws have caused California Indian tribes and other minorities to be excluded from the state’s water rights system in ways that contribute to their ongoing harm, argues a legal brief filed this month on behalf of the Winnemem Wintu Tribe and others.

Because this system has allowed a powerful few to lay claim to California’s waters, they say a state appeals court must consider how an important water rights case currently under appeal could worsen the environmental injustices they’re experiencing and cripple the state’s ability to sustainably care for its waters during severe drought.

The Winnemem Wintu Tribe are the Indigenous people of the McCloud River (or Winnemem Waywaket), which flows through what are now Shasta and Siskiyou counties. The brief was filed on behalf of a diverse coalition of grassroots organizations that includes the Shingle Springs Band of Miwok Indians as well as Little Manila Rising, a non-profit organization originally founded to advocate for South Stockton’s large Filipino community. Restore the Delta, an environmental justice non-profit that advocates for increased freshwater flows for the Delta region, was also part of the coalition. Two pro-bono law students from Stanford’s Environmental Legal Clinic wrote the brief on behalf of the coalition and submitted it to the court.

At the center of the case is the state’s complex water rights system, which has its origins in the Gold Rush era, and establishes the pecking order for who gets water first during times of drought. The system prioritizes the water claims of the right holders who own land next  to bodies of water (riparian rights) and rights holders that diverted and used the water first (“first in time” rights), not necessarily who needs the water most.

In their legal brief, the Winnemem Wintu Tribe and others in the coalition argue the court must support the state’s authority to steward its waters justly and sustainably during droughts, even if it means significantly cutting water allocations to the most senior water rights holders. That’s because tribes and other vulnerable communities will suffer the brunt of the harms as water becomes more scarce if the state can’t efficiently regulate senior water rights holders’ water deliveries, they say.

Under what’s known as the public trust doctrine, the Board has the responsibility to reign in wasteful water use, especially to protect water quality for people, animals and ecosystems. In response to withering climate-change enhanced droughts this past decade, the Board has made drastic cuts in water deliveries to major water users, including powerful irrigation districts, which have sometimes responded with lawsuits seeking to limit the Board’s regulatory authority.

That’s also what happened in 2014-2015 when the State Water Control Board curtailed water deliveries to senior water rights holders that included more than 100 irrigation districts and growers in the San Joaquin and Central Valleys who were receiving water from the Sacramento-San Joaquin Delta.

In response, a coalition of those irrigation districts filed suit, arguing the State Water Control Board didn’t have the authority to curtail their rights, even for environmental and public health reasons, because their water rights claims existed before the Board was created by state law in 1914.

The coalition members say they saw the court’s decision as potentially disastrous for not only their communities but also the future of California’s waterways. They filed an amicus brief, a legal document that provides pertinent information for a case and is submitted by organizations or people who aren’t directly involved in the case but have a significant stake in the outcome, in order to voice their histories and concerns.

The appellate court’s acceptance of the coalition’s brief was a significant recognition of its importance to the current water rights case, Stanford law students said.  They observed that the initial decision in the lawsuit included descriptions of how the water rights legal doctrine evolved over time that ignored the history of systemic violence and discriminatory laws that some say have made California water a de facto possession of white citizens.

Speaking to Shasta Scout, the law students said the brief is groundbreaking because it centers and connects the histories of violent and legal discrimination faced by Indigenous, Asian and Black communities, demonstrating how their shared struggles are all rooted in the current water rights doctrine.

Sydney Speizman, a second year law student said, “In a lot of the water history, it comes off as if the water rights were founded on a tabula rasa, a neutral background. But that’s not the case. (Not acknowledging past discrimination) is ahistorical and disconnected from the real policy consequences and impacts on a vital natural resource.”

In 1851, California passed a law that prevented Native people from claiming title to their ancestral lands as well as any water rights attached to that land. Winnemem Wintu people would likely continue to have water rights attached to their ancestral lands on the McCloud River if federal authorities had not removed them and flooded their homes under the Shasta reservoir during World War II.

The coalition also argues that the water rights system has contributed to the mistreatment and strangling of the state’s rivers and estuaries, by undemocratically consolidating control of California’s waters into the hands of a few. Many rivers are currently over-allocated, meaning there are more claims to water than actually exist in the watersheds. Rivers have also had their natural flows dramatically reduced due to diversions. Numerous vital fish species are on the brink of extinction because of the degraded condition of the state’s waterways threatening the loss of keystone salmon species, a situation that would create cascading harmful effects on the health of forests and other ecosystems.  If the appeal court rules in favor of the irrigation districts, the coalition argues, the state will lose some of its strongest regulatory power to ensure enough water flows through the rivers and estuaries, improving the health of vital Californian ecosystems.

At the center of the current appeal is the water of the Sacramento-San Joaquin River Delta, which is the largest estuary on the Pacific Coast and an epicenter of California’s struggles to steward its waters equitably and safely. It’s an important ecosystem, especially for salmon, where the saltwater from the ocean melds with the freshwater from the Sacramento and San Joaquin rivers. The Delta region encompasses 1,100 square miles and, in a normal year, about half of the state’s surface water begins as rain or snow and would flow through the Delta if not diverted.

Typically, about 5 million acre feet of water is pumped out of the Delta and transported via canals to both agricultural interests in the San Joaquin Valley and more than 27 million residents in Southern California cities. The extensive pumping of freshwater can cause severe ecological impacts that endanger humans and fish, by increasing the salinity levels of the Delta region’s water and causing dangerous toxic algae blooms.

According to the amicus brief, the pollution of the Delta region’s water continues to cause great harm to all of the coalition members in myriad and diverse ways. For tribes like the Winnemem Wintu and Shingle Springs Band of Miwok Indians, the deterioration of the Delta contributes to the precipitous decline of fisheries like the Chinook salmon, which traditionally are vital aspects of their spiritual and cultural lives as well as their diet.

For the Filipino community in South Stockton, which is located on the eastern edge of the Delta, the algae blooms have contributed to both water and air pollution. Stockton residents have some of the highest rates of asthma because of the poor air quality, and the impaired waterways restrict opportunities for economic development, recreation and subsistence fishing.

But representatives from irrigation districts note that the impacts of the recent severe droughts have also been extremely costly to the agricultural industry. A study by the UC Davis Center for Watershed Sciences estimated the 2015 drought alone cost the agricultural industry $1.8 billion and led to 540,000 acres of farmland being left idle, about a 50 percent increase over normal.

Responding to a request for comment from Shasta Scout, Melissa Williams, Public Affairs Manager, for the Modesto Irrigation District, wrote that many of the irrigation districts who initiated the litigation currently under appeal have “invested millions of dollars in water infrastructure based on our individual senior water rights.” She added that the California water system already in place works well and contains clear rules about how the state should respond to drought.

Regarding the issues raised in the coalition’s amicus brief, Williams said the history of discrimination “introduces political issues that are not directly related to the narrow legal issues” that will be examined during the appeal.

“You can’t separate the history from the legal issues,” she said. “It would be looking at the case with blinders. (The court has) to consider who will be directly affected by the consequences of their decision.”

Do you have feedback? Email us, or join the community conversation at Shasta Scout’s Facebook page.

Council Will Reconsider Whether To Declare Key Riverfront Land Surplus

After a break of several months, Redding council members will again discuss whether several key parcels at the Redding riverfront should be declared surplus, paving the way for the land to be sold to a consortium of developers and non-profits. If the properties are declared surplus, the city must first make them available to affordable housing developers and a list of public entities that includes ten local tribes, before they could be sold to the consortium.

Native advocates participate in a 2015 Protect Medicine Lake action led by the Pit River Tribe outside a federal courthouse in San Francisco. Photo by Marc Dadigan.

Our monthly Open Notebooks updates are a way for us to invite you into the journalistic process and encourage your collaboration in the news. It’s our goal that the Notebooks help you to see us as we really are so you’ll see that journalists are not the enemies of the people, we are just people, trying to make sense of this complex and confounding world. Just like you. We welcome your participation in our process. Join us!