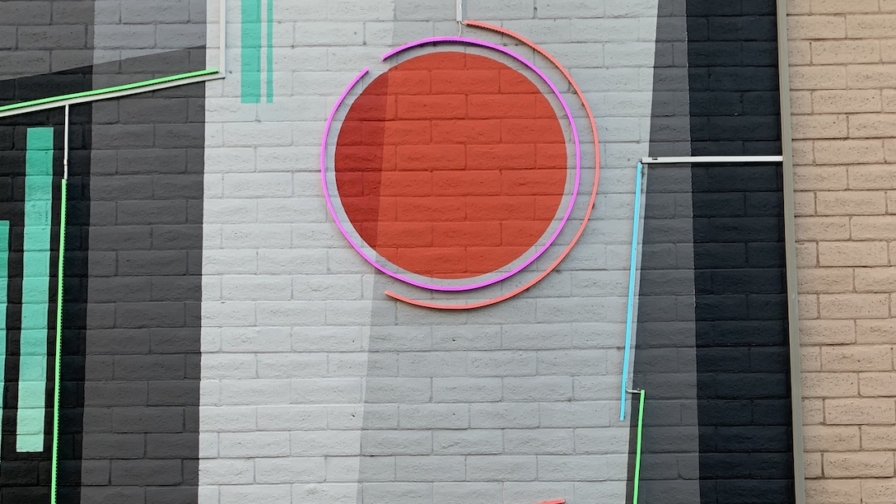 “Electric Alley” is a mural-like art installation that was installed in downtown Redding as part of the Redding Chamber’s City Identity Project
News: Civic Engagement

As the county votes on whether to recall a local supervisor, Redding’s Chamber announced a decision to end all endorsements and donations to political candidates. They’ve faced scrutiny for funding a group opposing the supervisor recall after being chosen by the county to distribute $4 million in federal COVID-relief funding to local county businesses.

Update: This article has been updated to include the value of the City of Redding’s tourism contract ($5 M over 5 years) which was awarded to the Chamber in April of 2021.

Two weeks ago, the board of the Redding Chamber of Commerce voted to dissolve its Political Action Committee (PAC), which endorses and donates to business-friendly political candidates. The Chamber, a 501(c)(6) which promotes Shasta County’s economic development and provides resources and support to local businesses, has operated the PAC since 1998.

The news comes as the county conducts a recall vote aimed at a Shasta County Supervisor Leonard Moty, in part because of claims that his decision to uphold state COVID mandates has harmed local businesses. That recall and the process leading up to it have contributed to tense board meetings that have sometimes included threats against public officials.

Jake Mangas, CEO of the Chamber, says recent political tensions have increased his interest in looking to change the Chamber’s approach to politics. He says he’s wondered for a long time whether it was a good idea to tie the Chamber’s public image and influence to politics, and he’s heard from many in the community that the Chamber’s political activity has kept some businesses from joining.

The Chamber received increased scrutiny after they were chosen by the county board to distribute $4 million in federal COVID-relief CARES funding to businesses affected by the pandemic. After Mangas found out the board intended to spend only $300,000 of the county’s $18 million in federal CARES money on grants for Shasta County businesses, he spoke up at a public meeting.

Supervisors ended up increasing CARES funding designated to business grants first to $3 million and later added another $1 million. They also designated the Redding Chamber of Commerce’s non-profit subsidiary, the Forward Redding Foundation, as the CARES business funds distributor. The Chamber distributed the CARES money to hundreds of businesses in amounts of up to $10,000 each.

But in December of 2021, as the Chamber prepared to distribute a small amount of remaining funding, two supervisors expressed concerns, with one citing a $6,000 political contribution to Shasta Forward, which was formed by three supervisors to oppose the recall, by the Chamber’s Redding Forward Foundation. Supervisor Les Baugh said at the time that the Chamber had “disqualified” itself from funds distribution due to its political involvement.

That feedback, Mangas said, contributed to his decision to act on long-standing concerns about the Chamber’s politics by surveying Chamber members on the issue of political action. He found that only 50% of Chamber members agreed that the organization should continue to donate to and endorse political candidates. In contrast, 85% were comfortable with the Chamber providing education and information about political candidates, without any endorsement.

He brought that information to his board, along with the results of a 2020 survey by the Western Chamber Executives Association which revealed that only 30% of local business chambers nationwide have PACs or endorse candidates. He also stressed to the board the importance of providing clarity when it comes to the Chamber’s newly awarded tourism marketing grant which is worth $5 million over the next five years. “We want to make sure that our city council members know we are not in the business of endorsements and candidate campaign funding,” Mangas said, “particularly because we’re receiving public funds for marketing.”

Two weeks ago, Mangas says, the Chamber board made the decision to dissolve the PAC. “Instead, we’re establishing a Government Affairs Committee (GAC) that advocates for businesses, collaborates with the public sector, and educates the community about business-friendly candidates.”

The Chamber will continue to be involved in the civic process by hosting forums for political candidates, producing a voter guide, and making sure that candidates are aware of the needs and desires of local businesses, but they will no longer endorse or fund candidates or campaigns.

“It’s important,” Mangas told Shasta Scout, “that we’re always in tune with the needs and wishes of our members and our industry. They’ve told us that there are other options we can use to approach representing businesses.”

He said he’s learned over the last several years of heightened tensions in Shasta County that political action by a business chamber can “unwind a lot of good.” Hearing from supervisors that the Chamber’s PAC work could also negatively impact their ability to help businesses with grants, Mangas says, made the issue even more significant.

“I don’t want the community to suffer from our political stance,” he explained. “From my perspective I’m excited with this new approach.  I think it responds to what the business community has said they want from us.”

“Our Greatest Weapon Is Our Relationships”: How the Coalition to Stop Fountain Wind Overcame Partisan Divides

From Indigenous sacred site protectors and former hippies to Trump supporters and conservative Christians, an eclectic Intermountain community collaborated last year to resist the proposed $300 million Fountain Wind energy project. Several key organizers talked to Shasta Scout about what the coalition’s story means for the future of the region and alternate energy.

Simplistic and inaccurate media portrayals of Shasta County’s political process risk contributing to deepening polarization and extremism. In this Building Democracy editorial column, we’re sharing what the regional and national media are getting wrong about Shasta County’s contentious recall. And why it matters.