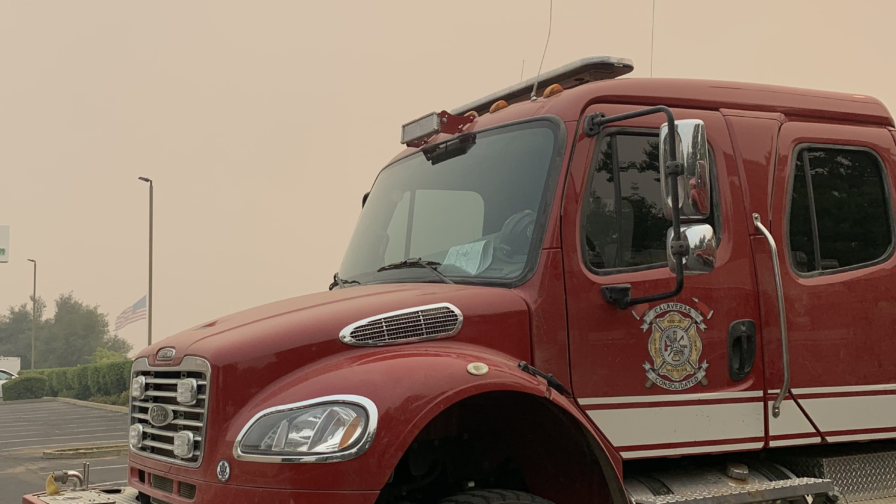 The climate march came one day after the release of an intergovernmental climate report indicating that even with swift and immediate worldwide action to curb emissions, current climate warming will continue for decades.

On Tuesday, local climate activists marched in downtown Redding during the hottest part of the day.

The protest action was planned by Sunrise Redding, a local hub of the national Sunrise movement. Participants hoped to focus attention on how climate change is contributing to increasing temperatures, drought, water shortages and wildfire emergencies in Shasta County. They’re advocating for specific local actions to respond and adapt to the climate change emergency including a city tree ordinance, more charging stations for electric vehicles, and a ban on new gas stations in non-industrial parts of town.

Activists mobilized the day after the Intergovernmental Panel on Climate Change (IPCC) released its sixth and most concerning climate report. It’s the first report by the IPCC to state clearly and unequivocally that climate change is affecting every region of earth, is worsening, and is being caused by destructive human actions.

In Shasta County, heat, drought, water shortages and wildfires have dominated the summer of 2021. Popular recreational activities like biking, hiking, boating, and swimming have been affected by low lake levels, extreme heat and worsening air quality caused by nearby wildfire smoke. It’s a particularly hard hit to an area that relies on nature-centered tourism.

And Shasta County is just one of many communities experiencing a string of climate-related emergencies in the western United States this summer. Incidents have included a Pacific Northwest “heat dome” that killed hundreds, a statewide drought across California, and an increase in the number of western wildfires.

Meanwhile the Dixie Fire is currently burning in Tehama, Plumas, Butte, and Shasta Counties. It’s the second largest California fire on record and is expected to continue burning into late fall or early winter due to the extreme heat and drought.

Such events are likely to continue, according to the IPCC report, which says that even if immediate, strong and sustained reductions in emissions of carbon dioxide worldwide stem the advance of climate change, global warming won’t stabilize for several decades.

It’s information that serves as a red flag for regions like Shasta County and the rest of California’s North State.

While local municipalities and counties can mitigate climate change by reducing emissions through responsible transportation planning and energy use, information in the IPCC report makes clear that regions must also focus on adapting to sustained impacts of climate change.

Needed regional adaptations are already becoming apparent. Problems with accessing cooling stations may have contributed to deaths in the Pacific Northwest. Heat waves over the summer pressured California’s power grid, leading to statewide calls for reduced energy use. Water shortages are affecting tourism as well as agriculture. Biodiversity and agriculture are affected by drought. And with long-term toxic smoke exposure, health concerns are rising.

Valerie Masson-Delmotte, cochair of the IPCC Working Group, called the climate report a reality check, saying: “We now have a much clearer picture of the past, present, and future climate, which is essential for understanding where we are headed, what can be done, and how we can prepare.

You can submit a correction to this story here.

On the first day of the Walk/Run, participants gather at Hidden Oaks Park in Round Valley, California. Photo Courtesy Kelda Britton.

I feel like participating in this walk/run is an act of survivance . . . an expression of tribal sovereignty. When tribes come together and support each other, it builds community and capacity for a brighter future for our children.

Sunrise at Redding's Sundial Bridge with an AQI over 300.