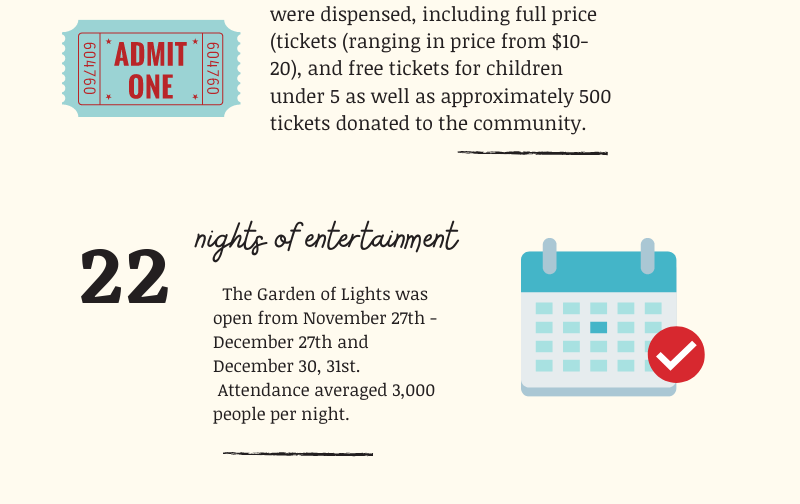 An Update on Redding’s Garden of Lights

Long before Redding’s Garden of Lights was set up, the project was the subject of controversy when it was partially funded with City of Redding tax dollars. Shasta Scout shares an update on the project’s costs, revenue and any known impacts on tourism.

One million lights covered 10 acres of Turtle Bay Exploration Park grounds this holiday season. The number of tickets dispensed (70,000) was almost double what organizers predicted, with an average nightly attendance of 3,000 people.

But in October 2019, long before the lights were set up, the project was the subject of some community controversy when a significant portion of it was funded with City of Redding tax dollars.  At the time, the City Council found themselves universally embracing the merit of the project while disagreeing on whether they should be the ones to fund it.

Council member Dacquisto was the lone dissenter, expressing concern about using a portion of transient occupancy tax (TOT), a 12% tax paid by those who stay in a Redding hotel, motel or other short-term rental, to fund the project. He asked project presenters whether commercial funding for the project had been sought and suggested that using a portion of the money usually given to the Redding Convention and Visitors Bureau (to promote tourism) might not be justified. Despite his concerns, the motion to fund the project passed, 4 to 1.

With the first annual Garden of Lights completed, Shasta Scout reached out to Turtle Bay Exploration Park for more information about the event, including costs and revenue.  Seth McGaha, Creative Marketing for Turtle Bay Exploration Park, helpfully shared the stats we have included in our infographic, but declined to share current cost and revenue information for the project, pending a report to City Council in the coming months.

Shasta Scout reached out to Council member Dacquisto with similar questions. He responded by sharing a June 30, 2020 invoice, sent to the City of Redding by Turtle Bay Exploration Park. The invoice notes the estimated total project cost at that time as $1,151,500 and details funding sources, with the largest funding amounts coming from the City of Redding ($250,000 given and $250,000 committed), KBK Foundation ($200,000 given), and the Redding Sheraton Hotel ($150,000 given).  While the invoice provides some clarity and details on costs for the event, questions regarding revenue remain, for now, unanswered.

Regarding any increase in tourism, Dacquisto shared a statement from a representative of the Redding Sheraton Hotel.  The statement was shared with permission and has been edited for clarity.

“The Garden of Lights definitely had a positive impact on the Sheraton occupancy.  It was great to see so many happy families and kids walking through the lobby holding their Garden of Lights memorabilia (light up necklaces, hot cocoas, etc.).  The Sheraton did spend advertising money on PR, social media campaigns, email marketing efforts and Third Party Website ads which also contributed to the occupancy increase from Garden of Lights.  Since this was the first year of the event, exposure to non-local markets was essential in spreading the word to other communities to increase travel to the Garden of Lights show.

As expected, the largest increase in occupancy was concentrated on weekend nights (Fridays and Saturdays). We experienced a 7.8% increase in RevPAR (revenue per available room) for those December weekend nights.”

City Manager Barry Tippin says the Redding City Council will likely hear a presentation from Turtle Bay Exploration Park on the Garden of Lights project on March 16th.  It’s unclear at this point when or if the City will analyze it’s use of tourism funds for the Garden of Lights to determine whether the investment has, so far, increased transient occupancy tax.  Tippin said that such an analysis would be ideal but might be complicated by the effects of COVID on the local tourism industry.

Two individuals with ties to militia groups in the North State have expressed interest in being appointed to the City of Shasta Lake Council.

An Interview with Tara Jean Stevens, Host of Heaven Bent