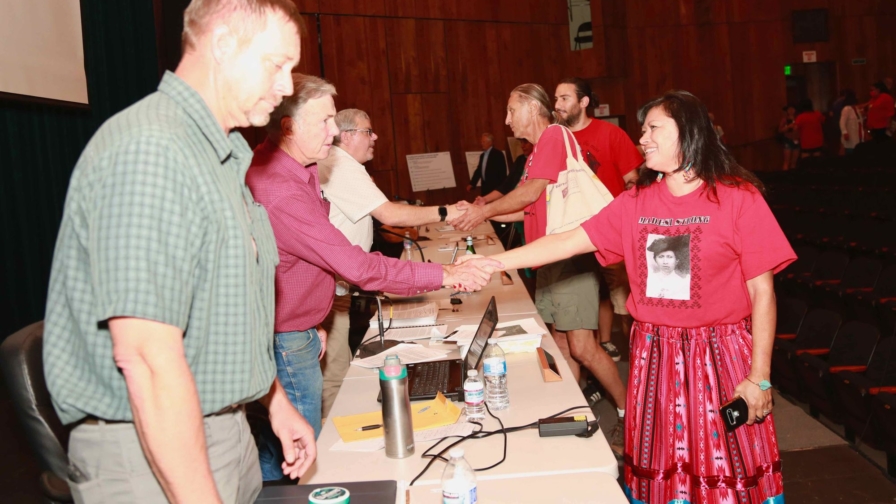 The Pit River Tribe scored a temporary victory when the Shasta County Planning Commissioners voted down the Fountain Wind green energy project on June 22. But ConnectGen’s appeal of that decision, filed June 25, is now pending.

Pit River Chairperson Agnes Gonzalez and other Pit River tribal citizens shake the hands of the Shasta County Planning Commissioners after their 5-0 vote to deny the permit for the Fountain Wind project, which threatens Pit River sacred sites and remains of their ancestors. Photo by Marc Dadigan

This is the first in a Shasta Scout’s mini-series on the Fountain Wind project. You can read the second article here.

“The project site has been a place of refuge for the tribe since time immemorial, for ceremony, gathering, prayer and healing. . . . (and the project) will directly impact our ability to continue these traditions,” she said. “The tribe has deep cultural knowledge of these sites and the county must listen to our expertise. . . This project erases the history of the Pit River people.”During the June 22 meeting held at the Shasta College theater, Gonzalez, more than a dozen Pit River tribal citizens, and myriad Shasta County residents spoke out against the proposed $300 million Fountain Wind project. If permitted by the county, Houston-based renewable energy corporation ConnectGen would construct 72 wind turbines, between 500 and 679 feet tall, on several mountain ridges within the ancestral homelands of the Madesi Band of the Pit River Tribe in what is now Eastern Shasta County.A few Pit River activists expressed pessimism about a favorable outcome for the tribe, given the county’s 2008 approval of the smaller 44-turbine  Hatchet Ridge wind farm, which is located just to the Northeast of the Fountain Wind site.  But after nearly 10 hours of testimonies and presentations, the Planning Commission unanimously voted to deny the required permit for the project.

The victory for the tribe is only a temporary one. On June 25, ConnectGen filed an appeal of the commission’s decision. The Board of Supervisors will issue a final vote on Fountain Wind at a date still to be determined, according to Shasta County Senior Planner Lio Salazar. While the commissioners expressed multiple concerns about the project, three of them said protecting the Pit River tribe’s cultural heritage, religious practices and the remains of their ancestors was a significant reason they denied the permit.“These are places where they go to pray and spend time with their god . . .How would you feel if we put a windmill in your church?” said Commissioner Steven Kerns, noting the first governor of California once promoted waging a “war of extermination” against California Indians. “We have continued that legacy by trying to destroy their culture all these years because they were in the way. I’m not going to be a part of that.”

“I was really surprised by their comments and by the humanity of (Kerns). What he said is what everyone should say,” said Radley Davis, a Pit River tribal citizen and Montgomery Creek resident. “It gave me hope for the possibilities of the future. We’ve got some differences, but we all have a responsibility to make sure people are healthy and the land is healthy.”

ConnectGen officials argued during the meeting that the project’s benefits outweigh the environmental impacts and the disruption to the Pit River people’s culture. With fossil fuel-driven climate change already threatening the safety of Californians by contributing to historically low precipitation and extreme wildfires, they said the project would increase the county’s renewable energy output. ConnectGen officials also estimated Fountain Wind would bring in $50 million in property tax revenue to Shasta County over the project’s 30-year lifespan and create 12 full-time jobs. They also pledged to invest $2 million in local projects for Intermountain communities, including $250,000 for a Pit River tribal workforce program. “The community might say they don’t want these projects, but they won’t say they don’t need these projects,” said Henry Woltag, director of development for ConnectGen, during the June 22 hearing.

But critics at the meeting noted the projected annual property tax revenues from Fountain Wind represent only 0.2 percent of the County’s 2020-2021 $569 million budget and questioned whether county residents would actually benefit from the emissions-free energy produced by the turbines. Woltag said bids from local utilities would be considered, but the power generated by Fountain Wind could possibly be exported to other municipalities or regions. Many local residents were skeptical Fountain Wind energy would be used locally. “The energy goes somewhere else so the investors can benefit, but then the project degrades our environment and harms our natural and cultural resources,” said Michelle LaPena, a Pit River tribal citizen and attorney.

During the June 22 meeting, ConnectGen representatives attempted to counter these doubts by touting the project’s environmental and community benefits, which included $250,000 to support a Pit River tribal workforce development program.  Pit River tribal representatives expressed outrage about the inclusion of the funding. which was never discussed with the tribal council. LaPena said  ConnectGen developed and included the idea based on a single call to a tribal employee. “The tribe asked them to remove that from their presentation, and they refused to take it out. They said it wasn’t misleading,” LaPena said.  Yet in their presentation, ConnectGen officials said they conducted extensive community outreach and made many changes to the project in response to public comments and environmental studies. The Pit River Tribe’s unified opposition to Fountain Wind has been public knowledge since at least February 2019, when the tribal council passed a resolution condemning the project.History Repeating Itself?Several Pit River tribal citizens see Fountain Wind as the latest in a long line of extractive projects of colonial development. From the Gold Rush genocide in the mid-19th century to the construction of PG&E’s series of hydroelectric dams on their ancestral watershed, Pit River people’s ecologies, culture and lives have long been sacrificed in the name of progress and profit. Similarly, the Fountain Wind project would desecrate sacred areas, disturb ancestral remains and disrupt  important ceremonies. “When do we get to heal?” asked Brandy McDaniel, Madesi Band Cultural Representative in her speech to the Planning Commission. “(Our homelands) play a great role in our healing from the past forced removal and government-backed genocidal acts against us … our connection to the land is so tied to our identity as a people, one cannot be separated from the other.”ConnectGen’s Woltag told Shasta Scout that the corporation wants to have a productive and respectful relationship with the Pit River Tribe.  He said the Fountain Wind project was designed to avoid impacts to all known culturally significant sites and no ancestral burial grounds have been identified within the project. He expressed disappointment the tribe had not shared more information about historical sites so ConnectGen could further limit other potential disturbances. “We’ve engaged the Pit River Tribe, we’ve performed a site visit and we want to work with the tribe and make adjustments if they provide more specific feedback,” Woltag said. “They will always have a seat at the table, and we would be all ears to their concerns during construction.”

The Pit River Tribe was joined in opposing Fountain Wind by many Eastern County residents who feared the project would significantly industrialize thousands of acres of what they described as natural forested mountains of unparalleled beauty. The 450-seat Shasta College theater was nearly packed when the meeting began at 1 p.m., and many speakers expressed concerns about the environmental impacts on the ridgetops as well as the likelihood that significant numbers of culturally and ecologically important birds and bats will be killed by the turbines.

If their appeal is successful, ConnectGen will be able to erect turbines twice the size of the Statue of Liberty and taller than Shasta Dam. The project would also require the construction of 24 miles of new forest roads, as well as the widening of 33 miles of existing roads. Nearly 60 miles of above- and below-ground collection lines would have to be constructed to connect the turbines to the grid of PG&E’s Pit 1 hydroelectric project on the tribe’s ancestral watershed. According to the environmental impact study, about 2,000 acres of land would be permanently or temporarily deforested to construct the massive turbine pads at the foundations of the turbine towers. Fire danger was also on many people’s minds, especially given the history of the catastrophic 1992 Fountain Fire, which leveled 64,000 acres and burned down 300 homes in the Montgomery Creek and Burney areas.  Several people, including representatives from different pilots’ associations, stated the massive turbines would severely limit CalFire’s aerial firefighting in a region that the agency has designated as a high fire risk. ConnectGen officials counter that expert studies indicate the project would decrease fire risk, especially due to the construction of more roads that would serve as fire breaks. Those who spoke in favor of the project at the June 22 meeting were primarily members of electrical, builder and trade unions, who urged the Planning Commissioners to permit the project so they could work close to home, albeit only temporarily.  “We support the project because of the long-term benefits towards education, the environment and economy,” said Chad Scott, executive director of the Shasta Builders Exchange. “It’s the best designed project to mitigate environmental concerns … and (ConnectGen) has been a model for reaching out to the community.” Though the Fountain Wind project would create more than 200 temporary construction jobs, many questioned whether the lasting destruction, both to the mountain ridges as well as to the Pit River people’s culture and religion, was worth a short-term boost of clean energy. According to ConnectGen, the project would operate for 30 years, at which time the turbines would be decommissioned.“When we talk about development, it’s always synonymous with destruction … I don’t understand why we can’t look to smaller, micro-grid types of development,” said Shasta County resident Jonathon Freeman. “Again and again international companies come here to exploit us and leave us with the stumps.”

7.6.2021 10:51 am: This piece was edited to correct an error which inaccurately attributed a statement about an ancestral remains to a ConnectGen official. No known remains have been located in the project site.Marc Dadigan is a Contributing Editor and Indigenous Affairs Reporter for Shasta Scout.  He is a former contributor to Indian Country Today, Reveal and the High Country News and current doctoral student in Native American Studies at UC-Davis with an emphasis in human rights and genocide studies.

Do you have a question or comment?  Join the community conversation at Shasta Scout’s Facebook page. Do you have a correction to this story? Email [email protected]

On August 6, local Indigenous youth will share their original works as part of the film, Being Seen: Native Youth on Identity, Culture, and Justice. The project was funded through a California Humanities Youth Voices grant.

Fountain Wind Has Ties to Corporations Worth Billions; Is It a Form of “Green Colonialism”?

Local tribes regularly advocate for environmental protection and restoration. So why are local Native peoples’ cultures and religions continually threatened by green projects?