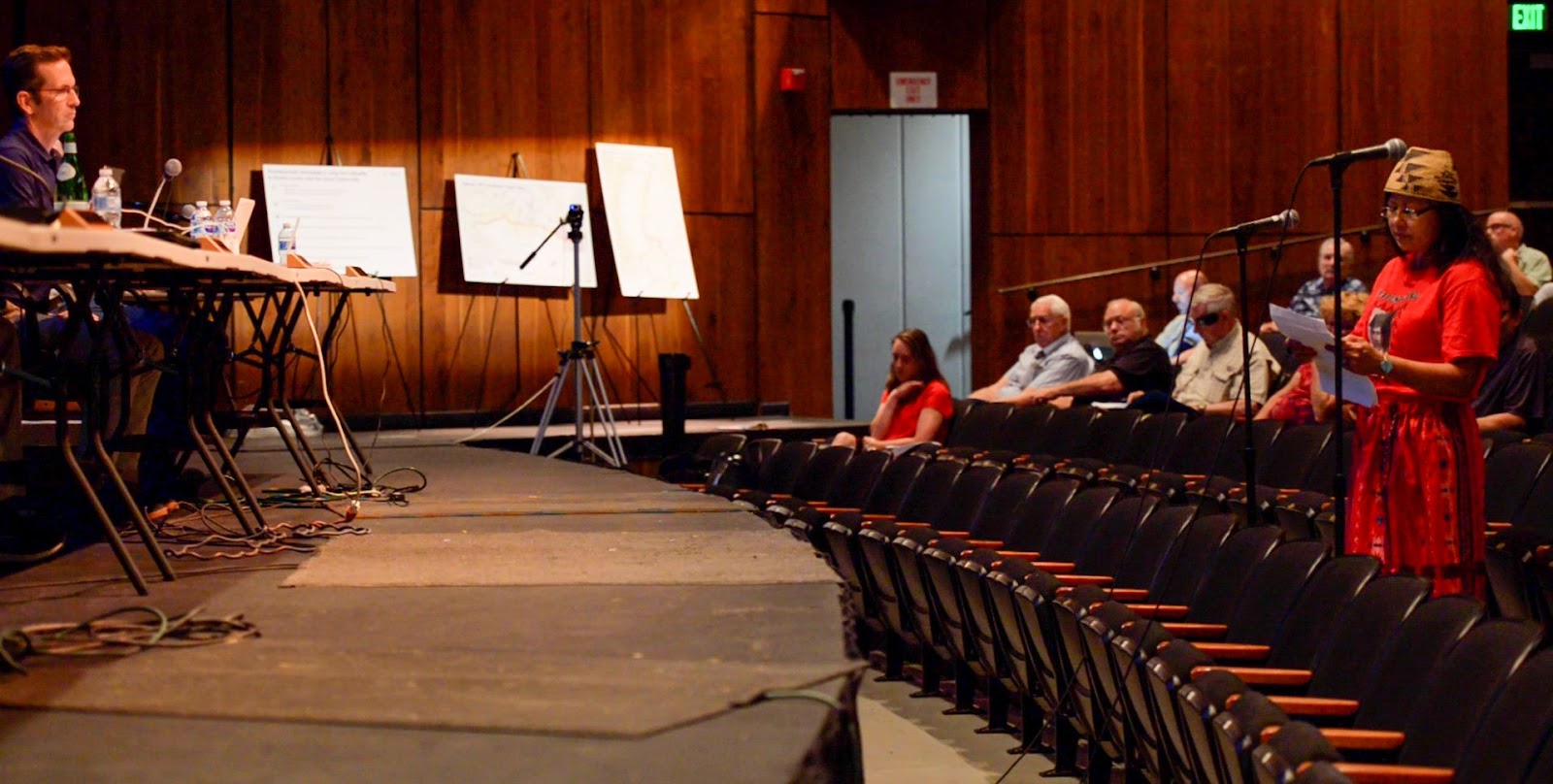 This is the second in a Shasta Scout’s mini-series on the Fountain Wind project. You can read the first article here.

Pit River tribal citizen Radley Davis once prayed and fasted on Hatchet Ridge, where Pattern Energy’s 44-turbine wind farm now looms, visible for miles down the Highway 299 corridor. He and other Pit River people describe the impact of the wind farm on Hatchet Ridge as  “mountaintop removal.” They say it’s been a difficult blow to their ceremonial life and one that could be repeated if the Shasta County Board of Supervisors approve the permit for Houston-based ConnectGen’s $300 million Fountain Wind project — the Shasta County Planning Commission decided to deny Fountain Wind’s permit at its June 22 meeting, but the supervisors can override that decision.

If greenlighted, ConnectGen would erect 72 turbines, each between 500 and 679 feet tall, on several ridges within about 30,000 acres of privately owned forest land six miles east of Burney, north and south of CA 299.

The project would reportedly generate enough emissions-free energy to power 86,000 households and boost county tax revenues by $53 million over the project’s 30-year lifespan.  And ConnectGen has pledged to invest $2 million in Intermountain community projects, such as a $1 million redevelopment of Cedar Creek elementary school and $250,000 for high speed internet. Perhaps most importantly, as Shasta County residents are experiencing the firsthand impacts of climate change — from catastrophic forest fires to historically low precipitation — Fountain Wind could potentially offset 128,000 metric tons of carbon dioxide emissions from fossil fuels, according to the draft environmental impact report.

But Pit River people (as well as many non-Indigenous Shasta County residents) say these benefits aren’t enough to justify the project’s approval. They cite a nearly two-century history of colonization that has stoked violence of various forms against local Indigenous peoples’ ecologies, cultures and lives, often in the name of progress and profit.

Through December 31 NewsMatch is matching donations dollar-for-dollar up to $19,000, giving us the chance to raise $38,000 for local journalism in Shasta County. Don’t wait — the time to give is now!

“They’re talking green energy, but applying the same approaches conventional development has always taken, which is to run roughshod over Native communities and Native concerns,” Gilio-Whitaker said of Fountain Wind. “The actions speak for themselves.The tribes are obstacles like we always have been.”

ConnectGen Director of Development Henry Woltag wrote via e-mail that the company objects to “any implication they have been dismissive of tribal concerns,” and instead claims that they have been “extremely conscious of the cultural sensitivities of the project.” He noted that ConnectGen has met multiple times with Pit River representatives and performed a site visit with the tribe to discuss ways to avoid impacting specific resources or sites. “To this day, we continue to invite dialogue with the Tribe to better understand how to find common ground,” Woltag wrote.

Pit River tribal citizens and Shasta County residents who criticized Fountain Wind at a recent Planning Commission meeting alluded to a historical pattern of corporate exploitation and questioned whether the project’s potential clean energy output could justify the visual intrusion of 600-foot turbines, the environmental impacts, and the spiritual and cultural harm to the Pit River Tribe.

The history of international corporations’ incursions into Indigenous territories stretches back centuries, when the original agents of colonialism were businesses like the East India and Hudson Bay Companies, which were chartered by nascent nation states that lacked the capital or wherewithal to operate sprawling colonial enterprises.

Scholars like Gilio-Whitaker, as well as many activists and environmentalists, argue modern transnational corporations continue the legacy of the early colonialist corporations, extracting resources from vulnerable communities, especially Indigenous ones, to enrich distant elites. In recent years, development projects that threaten local tribal cultures and religions have often justified their necessity based on environmental benefits. Since the 1980s, the Pit River Tribe has been fighting a proposal by the U.S. Bureau of Land Management and Texas-based energy company Calpine to industrialize the sacred Medicine Lake Highlands for the purpose of geothermal fracking. And in neighboring Indigenous territory, the Winnemem Wintu Tribe has been fighting since the early 2000s the U.S. Bureau of Reclamation’s plan to raise Shasta Dam, which would inundate or damage 40 important sacred sites. The Bureau states the raise is necessary to supply more cold water to endangered Sacramento Chinook salmon, although in 2015 environmentalists were able to procure a suppressed U.S. Fish and Wildlife Service analysis disputing this claim.

But ConnectGen’s Woltag says that the project has a vital role in staving off the worst impacts of climate change. By email Woltag shared, “We value cultural resources, and the overall health of our planet, and rejecting projects like Fountain Wind only make matters worse and further jeopardize the environment and resources we all value,” he wrote.

John Lammers, whose 600-acre family cattle ranch in Moose Camp would be surrounded by the giant turbines, disagrees that the project is motivated by care for the environment.

“To me, it’s about the green of the dollar, not the green of the environment,” said Lammers. “You’re destroying acres of scenic, cascade timberland areas for generations, just to save a carbon footprint for a narrow period of time.”

ConnectGen officials declined to provide their revenue projections for the project, saying only that they will have a “single-digit rate of return, which is common in the industry.”

Want the inside scoop? Sign up for text alerts!

Woltag elaborated that wind energy projects are attractive because they provide modest but consistent revenue streams, especially since ConnectGen has 10 years of wind data upon which to base their investment. But, he said, “it’s not like we’re going to be raking in the profits on this.”

The modest profit projections for Fountain Wind belie the massive corporate bankrolls backing the green-energy project. ConnectGen was established by the billionaire international private equity firm Quantum Energy Partners, which was recently in the news for bidding on bankrupt oil and gas corporations as well as launching a campaign to raise $4.5 billion for their investment portfolio.

And ConnectGen purchased the rights to operate the project from Pacific Wind, a subsidiary of Avangrid Inc, which has $38 billion in assets and is itself a subsidiary of the multinational energy company Iberdrola, which netted a profit of more than $1 billion in the first quarter of 2021 alone.

Both Iberdola and Quantum Energy Partners hold  fossil fuel companies as assets and if Fountain Wind is an indicator, their green energy ventures may be following old patterns of tribal consulting — engaging tribes well after the project has been designed.  The result is that tribes often have limited influence over developments in their territory beyond negotiating so-called mitigation measures, which often emphasize protecting material items rather than preserving living cultural and religious practices. 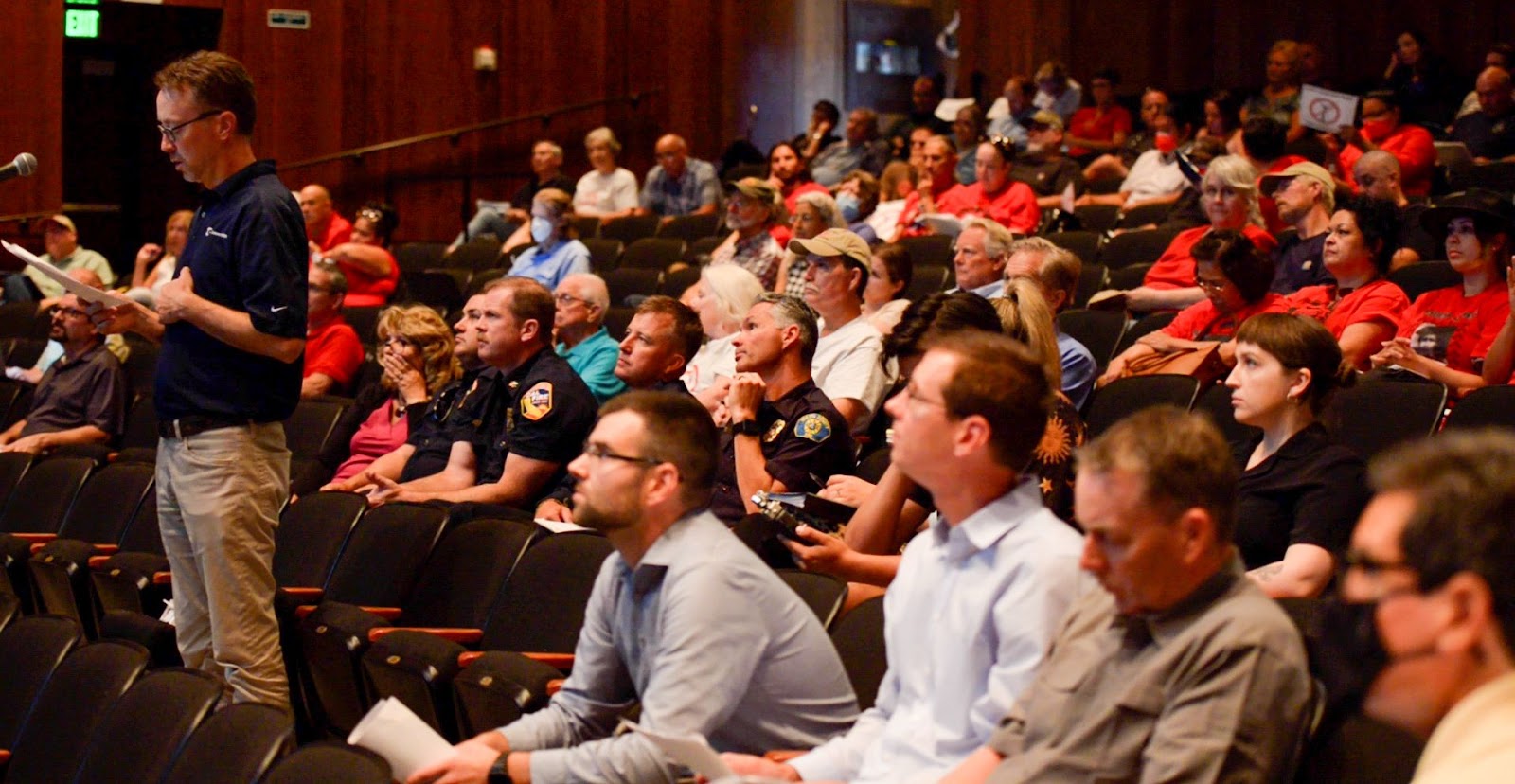 But Gilio-Whitaker said the failure to include the Pit River Tribe in designing solutions from the start represents a missed opportunity for green energy development. She says Indigenous communities and tribal nations could be valuable partners in meeting California’s goal of reaching 100 percent emissions-free electricity by 2045, especially considering California tribes have proven to be astute practitioners of sustainable environmental stewardship.

“It’s really short-sighted. They could really be using the opportunity to engage with tribes in a socially conscious way,” Gilio-Whitaker said, “They’re not connecting the dots.”

Many scientists have concluded restoring biodiversity and ecosystems is also an essential component of tackling the climate crisis, and, for example, the restoration of endangered species like salmon and beavers could also be key to tackling California’s water challenges. Many Indigenous peoples are uniquely qualified for this work.

Locally, the Pit River and Winnemem Wintu Tribe have been advocating for salmon restoration, as well as for environmental job programs, based on their own traditional ecological knowledge, a form of place-based Indigenous science that is built on millennia of assiduously observing and tending to their ancestral homelands. According to a United Nations study, Indigenous peoples represent only five percent of the world’s population but the lands they steward account for 80 percent of the world’s biodiversity.

Yet they are not always engaged as important environmental leaders and decision makers by developers.

“When (ConnectGen) made their rebuttal to all the public meetings (at the June 22 meeting), they told the Planning Commission, ‘Listen to the experts,’” Radley Davis said. “But I’m thinking, ‘We’re the experts! We’re the people who have 20,000 years of traditional ecological knowledge and history with these lands.’”

Marc Dadigan is a Contributing Editor for Shasta Scout. He is formerly a contributor to Indian Country Today and is currently a doctoral student in Native American Studies at UC-Davis with an emphasis in human rights and genocide studies.

Do you have a question or comment?  Join the community conversation at Shasta Scout’s Facebook page. Do you have a correction to this story? Email [email protected]

As a reader-funded outlet, we rely on donations to fund our work and keep our content paywall free. Do you support free online news in Shasta County?

After months of debilitating drought caused by federal water cuts and local water sales, the Anderson-Cottonwood Irrigation District may be receiving up to $3.6 million…

After its driest three-year stretch on record, California braces for another year with below-average snow and rain. Conditions are shaping up to be a “recipe…

ConnectGen is appealing a June denial of the controversial energy project by the Shasta County Planning Commission. They say their newly proposed modifications will reduce…

Subscribe to “Signals from Shasta Scout” — our stories and news updates, right to you.

Opinion: The Indian Child Welfare Act Safeguarded My Connection To My Tribal Community And My Identity

Federal Drought Relief Might Be On The Way for A.C.I.D.

We Scout out the truth, for you.

Our news will always be free to read, but it’s not free to create. We will never charge for the news but would so deeply appreciate your voluntary support.

This Is The Work: Becoming “Scout”

Editorial: We Build Democracy By Telling The Truth About Power, Our Diverse Community and Ourselves