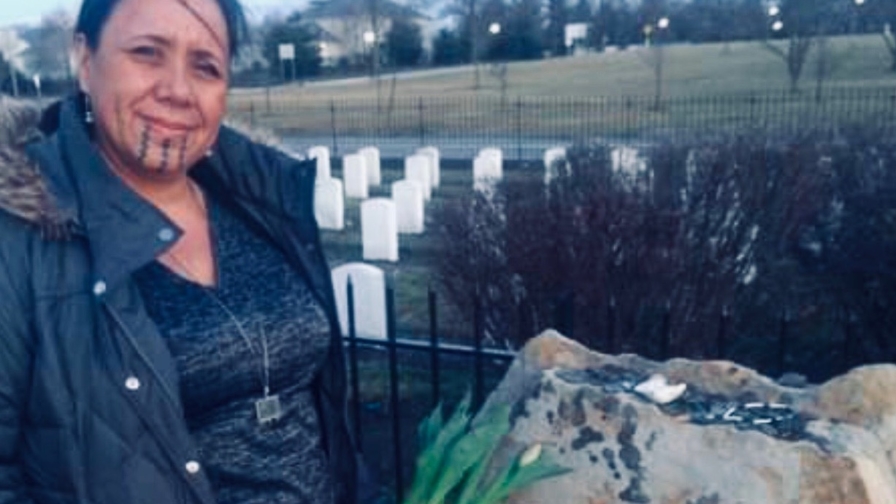 For Kenwa Kravitz, every year of her Shasta County grade school education began the same way. Teachers fumbling to pronounce her Wintu name and students teasing her with dances and songs meant to mock Native culture. It wasn’t until her final years of high school, she says, that she finally met a teacher who not only asked with interest about her Native heritage, but who had knowledge of the Wintu people.

Kravitz, who is both Wintu and Pit River, says she often felt unacknowledged and misunderstood as a Native student within California’s public school system. When Indians were spoken about in school, she says, it was always in a negative light. And the stories were always about plains Indians, she says, not local Native peoples. “I remember hearing people use the word ‘savage’ in school”, she says, “And I would think of my grandmother, Myrtle Cisneros, a highly educated Native woman and the first Native person to graduate from Shasta College.”

Kravitz now sits on the American Indian Advisory, a group of Native representatives from all four local tribes who work with the Shasta County Office of Education (SCOE) to advocate on behalf of the needs of Native youth in Shasta County schools. It’s that group that provided the understanding and information behind legislation recently signed into law by Governor Newsom. That bill, AB 516, ensures that Native students across California are given excused absences for attending cultural events and ceremonies, addressing one of the primary causes of the high rates of absenteeism among Native students.

Judy Flores, Superintendent of the Shasta County Office of Education (SCOE), says she was alarmed by what the numbers showed when California first released data on chronic student absenteeism in late 2017. “Not only was Shasta County above the state average,” she says, “but our Native population was significantly above the County average.”  Countywide, Flores says, Native absentee rates were almost double that of other students. In some districts, she says, over 30 percent of Native students were chronically absent.

While sharing that data at a state board meeting in the fall of 2018, Flores met Dr. Niki Sandoval, a member of the Santa Ynez Band of Chumash Indians, who was at the time the Educational Director for the Chumash Tribe in Santa Barbara County. Sandoval’s work with Native students there had increased graduation rates from 50 to 100 percent among Chumash students, Flores says.

Sandoval agreed to help Flores conduct a listening session with representatives from Shasta County’s Native community. “What I uncovered through the process of listening,” Flores says, “was how much hurt was there and lack of trust with education…not really feeling like they belonged in our schools.” The very next month Flores started what’s now called the Shasta County American Indian Advisory.

Working with April Carmelo, Coordinator of Shasta County’s Indian Education program, Flores developed a survey asking Native families what was affecting student attendance, “to really learn and understand what we are facing.” Over two hundred families responded. The anonymous data from those surveys provided several key reasons for absences, including attendance at Native ceremonies. “I’m a white female,” Flores said, “this is not my background. I asked the group, ‘help me understand more about ceremony.’”

Native ceremonies are of primary importance to the well-being of Native children, Kravitz says. For children, “connecting with their tribal community and with the land. . . .brings forth well-being within them and establishes their identity.” She says Native ceremonies are essential to a Native child’s education as read, writing and math. “Our traditional view,” Kravitz continues, “is that our children have always been educated . . . teaching a child about where to gather foods or medicines or basket materials, having a little girl sit next to her gramma and learn how to make a basket, that lived experience is education.”

Today’s barriers to attendance at Native ceremonies—which can be several days long and take place at sacred sites far from the city— have a painful history for Native peoples, tracing back to historical efforts to eradicate Indigenous religions. In the Gold Rush era, during which genocide of Native people was widespread, Euro-American settlers regularly targeted ceremonies for massacres and kidnappings, meaning that Native people often had to risk their lives in order to practice their religions. In 1883, the federal government adopted a series of legislative acts known as the “Code of Indian Offenses,” which allowed federal agents to police and ban Indigenous religious practices. Locally, many Native people continued to practice their religions underground until the passage of the 1978 American Indian Religious Freedom Act, which finally provided them with First Amendment protections other religions in American had long experienced.

Historically, education has been a place of systemic oppression of Native children’s religious expression. Around the time the Indian codes were passed, the Indian boarding school movement rose to prominence, forcing assimilation under the mission of “Kill the Indian, save the man.” Native students at the federal- and church-run boarding schools often faced harsh punishments—including physical and sexual abuse—if they practiced their religions or spoke their languages while living at school.

Many scholars have argued that some of the punitive and exclusionary tenets of the boarding schools, such as the ceremony law, are still present in modern public schools and require interventions. For decades, many California Indian educators have been advocating for reforms, such as more accurate history curricula, often only to meet dead ends.

Kraitz references this historical background as she speaks about her complex emotions surrounding the passage of AB 516. She is grateful, she says, especially for Flores, whose commitment to listening, has made SCOE’s work with Native communities different and successful. “I think it’s a model for a lot of organizations out there,” Kravitz says, “SCOE more or less facilitated this space and it’s kind of been the table where we can all come and have these discussions.”

But she adds, it’s a hard reality for the Native community that it took people like Flores to make changes to education law happen. “It’s kind of bittersweet in a sense,” Kravitz says, “Why wasn’t it that when our elders two or three generations ago tried to make these things happen they didn’t?” Instead, she says, it took “people who hold space in places and positions and offices that we don’t yet.”

“The reality is,” Kravitz continued, ”this is what our people have been saying for so long about our history, the boarding schools, the genocide, the erasure from historic narratives. We’ve been saying this for a long time, we’ve been trying to explain this, and now our allies such as Judy can go and speak and bring us into those spaces to speak to those issues. It’s beautiful yet bittersweet at the same time because what would be right is that our people had a voice that was valued. That’s the bittersweet part.”

Hearing that Native cultural ceremonies weren’t protected as an excused school absence came as a surprise to California’s First District Assemblymember Megan Dahle. “It was one of those kinds of assumptions,” she says, “I was like, wait a minute, that’s not already taken care of?”

Dahle says she’s proud of what was accomplished with AB 516. “This addresses the whole student, the whole child, what makes them happy, whole, and secure in who they are. So I’m hopeful that Native Americans going to school do not feel excluded in any way.”“

Sandoval, who helped Flores conduct early listening sessions with Native community members, now works for WestEd, an education research center in California. She’s reached back out to Flores in hopes of using research about what SCOE and the American Indian Advisory have accomplished as a model for other counties, and SCOE was mentioned in a recent WestEd brief about educational equity. Sandoval says cultural and ceremonial foundations are essential for Native peoples, “for the sake of our survival, well-being, and full participation in school.” That’s why the work of Flores and the American Indian Advisory are making a measurable difference for Native students, she says.

Flores says much work is ahead, but she’s proud of what’s been accomplished so far and thankful for the trust the Native community has extended. “I’m super grateful to each of the tribes for their willingness to let me in and come to the table so we can work together on ways to solve the problems,” Flores says.

Kravitz is thankful too.

“I always acknowledge the sacrifice of our ancestors, what they went through, the prayers they prayed to get us here and the work of our elders who fought hard to get us where we are today,“ Kravitz says. “Many of our ancestors died to allow us to be here today,” Kravitz says, and she thinks of it as her responsibility to make the future better for her descendants. Ninety-seven percent of the northern Wintu people did not survive the period between 1850–1880 when $5 per head bounties were offered for dead Native men, women and children in Shasta City. “The Wintu still aren’t even recognized by the U.S. government,“ Kravitz said, “and yet here we are, still working towards inclusion.”

10/3/21 12:13 Minor editorial updates have been made to ensure the accuracy of this piece.

Marc Dadigan contributed to this story.

Photo by Jacob Kiesow for Unsplash

In this Building Democracy column we’re sharing the strategies that are shaping our coverage of Redding’s riverfront land development proposal and other news stories. And we’re welcoming your feedback.

A new Texas anti-abortion law and a pending Supreme Court case that could lead to the overturning of Roe v Wade, present urgent concern for the majority of Americans that support abortion access.