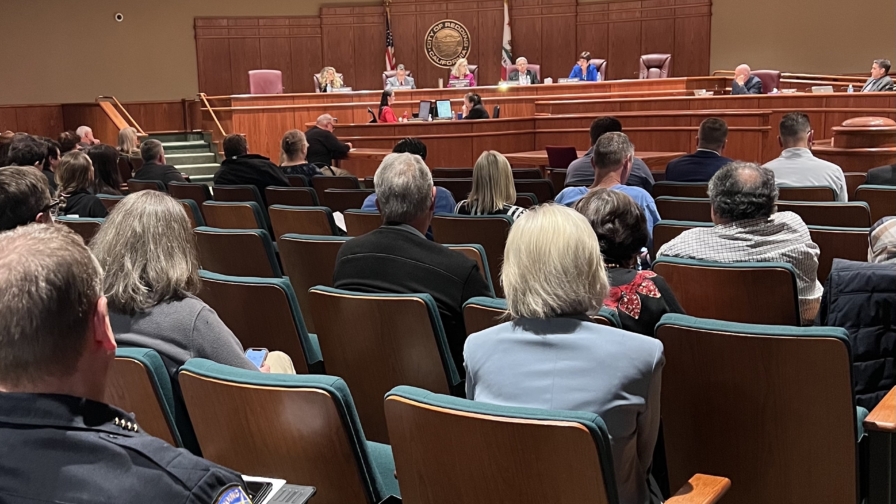 Public Riverfront Land Will Remain in Public Hands . . . For Now

Redding’s City Council voted to utilize funds to begin a city-led planning process instead of declaring prime riverfront properties “surplus.” The vote followed months of discussion, public workshops, and community surveys about public land close to the Sundial Bridge. The land issue has provoked significant community conversations about who represents a city stakeholder and how local government engages the community in planning and decisions.

This story is part of Scout’s ongoing coverage of proposed riverfront land development – you can find the rest of the series here.

More than seven months of council discussions, community fears and high-stakes public workshops culminated Tuesday night in an anything-but-simple Redding City Council discussion and vote on whether to declare key publicly-owned riverfront land “surplus.” A declaration of surplus would have been the first step in a possible sale to developers that was initiated last September.

Impassioned public comments both for and against the surplus declaration and proposed development of the land lasted for hours. As has been the case over a series of four previous public workshops and a number of community survey responses on the topic, the majority of commenters spoke against selling the property, citing environmental concerns, loss of public control, and deep, millenia-long Indigenous connections to the land.

Calling the vote a “one hundred year decision,” council members first listened to public comment then debated vigorously over how to move forward. They made a series of disparate motions that included declaring the land surplus, sending the item to the people for a vote in November, and initiating a city-led planning process for the land in lieu of a surplus declaration.

In the end, Council member Erin Resner’s motion won out, with the council voting four to one to keep  public land in public hands, for now, and move towards funding a city-led planning process for the riverfront area. The vote leaves open the potential for a future declaration of surplus if needed to pave the way for a long-term lease or even sale of the land after planning.

The month’s-long process leading up to last night’s vote stirred discussions around the democratic process that have gone deeper than the controversial question at hand. Conversations stimulated by the question of public versus private land ownership at the riverfront have centered on what role the broader community should play in city planning and growth, who city staff consider “stakeholders” in development and how the city engages the public in decision-making. Vocal community members have publicly expressed concerns that the city’s current interactions with the community center too narrow a group of stakeholders, leaving many important voices, including Indigenous ones, out of the process.

Tuesday night’s vote was a response to a process that began last fall after a consortium of non-profits and developers known as the D&D group submitted a letter of intent to the city in the hopes of buying and developing prime riverfront land. The process got off to a rocky start for a number of reasons. Discussion of the consortium’s offer was Initially scheduled as a closed-session council agenda item as a “real estate negotiation” leading to wide community concerns about transparency and fears that the land could be sold without public engagement. The initial council agenda item also referenced a more than 200-acre area of land along the riverfront, although it was later clarified that only a 45-acre area that encompasses the Redding Rodeo grounds and Civic Auditorium site were under discussion for possible sale.

Referencing some of those missteps in the process during Tuesday’s meeting, Resner said it was time to “shake up the etch-a-sketch” on the city’s process and start over, being sure to actively and thoughtfully involve the public along the way. Council member Mark Mezzano strongly agreed, holding up a stack of hundreds of printed emails from the public and saying he had invested many hours in listening to the community on this topic and felt the public, especially Indigenous peoples, needed to be more included in any process moving forward. Dacquisto, who last September called almost immediately for the consortium’s proposal to be made public, agreed with increased community involvement saying community members had been the ones who originally voted to acquire riverfront land and should be the ones to decide whether to sell it.

But while Council members Julie Winter and Kristen Schreder concurred with the idea of fully involving the public, they disagreed that declaring the land surplus stood in the way of that. Their comments echoed similar statements made by Redding City Manager Barry Tippin and consortium representatives over the last six months, emphasizing that declaring the land surplus did not mean the city would sell it, or that the public would not be included in future planning.

Making a declaration of surplus prior to any sale or long-term lease of public land is necessitated by a California law known as the Surplus Land Act (SLA.) That law requires the city to make surplus property available to affordable housing developers and public entities, including local tribes, before selling it to a private interest like the consortium. That process concerned some council members, who worried that the SLA’s requirement for “good faith negotiation” with any affordable housing developers that came forward could result in litigation should the council ultimately refuse fair offers. City attorney Barry DeWalt said it was unclear if such litigation could result, but both he and Tippin reassured the council that offers from affordable housing developers would be extremely unlikely because of “encumbrances’ or complications around how the land is currently zoned and leased.

Potential violations of California’s Environmental Quality Act, or CEQA, also played a large role in the council’s decision not to surplus the land. A letter sent to the Council last week on behalf of local environmental groups advised that declaring the parcels surplus prior to an environmental review would violate CEQA, in part because the council already has a proposal in hand that is likely to pose broad environmental concerns. In response to multiple council questions about concerns raised in that letter, DeWalt explained that while he understands CEQA as allowing the city to declare the land surplus prior to an environmental review, he could not guarantee the city wouldn’t face CEQA-related litigation.

The combination of legal concerns, public feedback against declaring the land surplus, and the complexities of the community-engagement process proved too potent a combination to allow the council to move forward with a surplus land declaration Tuesday night. But the option remains on the table in future. The council did not vote against a future sale or development of  the land, choosing instead to consider reallocating federal COVID-relief funds from the American Rescue Plan Act, or ARPA, to pay for a city-led planning process that could result in a number of different future decisions. How much of the ARPA funds to reallocate, what other projects the funds will be taken from, and who will be engaged for the city planning process remain open questions that will be answered by votes at upcoming council meetings.

What’s clear as the city moves forward towards planning for the riverfront, is that many agree that some voices have been less represented than others in the city’s development and processes thus far.

Speaking towards the end of the evening, Winnemem Wintu Hereditary Chief and Spiritual Leader Caleen Sisk reminded the council that her people and other Native community members are the original inhabitants of what is now known as Shasta County. “People talk about how long they’ve been here,” Sisk said, laughing softly, “We’ve been here for a very long time. VERY long; before THIS was.”

Reminding the council of a local history that includes the stealing of Wintu lands and the killing of Wintu peoples, Sisk explained the importance of the river, the salmon and the land both to her people and to the future of a local community faced with the escalating effects of climate change. Referencing a formal apology for “grave injustices” against the Wintu people made by then-Mayor Winter in 2019, Sisk told them that words are not enough.

“We need more than an apology,” Sisk said. “We need land back. We need to be real people with real living culture that belongs in this city.”

Annelise Pierce is Shasta Scout’s Editor and a Community Reporter covering government accountability, civic engagement stories and local religious and political movements. You can contact her at [email protected]

Do you have feedback on how we are covering this story? Email us, or join the community conversation at Shasta Scout’s Facebook page. Do you have a correction to this story? Submit it here.

Winnemem Wintu people at the McCloud River in 1882.

Some Wintu People Call For “Land Back” During Riverfront Meetings. Here’s Why.

The land we now know as Redding has been a part of Wintu people’s vast homelands for thousands of years. Today, after surviving state-sponsored massacres, violent removals, and discriminatory legal doctrines, Wintu tribes remain almost entirely landless. For some Wintu people, the proposed sale of riverfront land is inseparable from the need to reckon with this often-suppressed history.

Do we have the power to slow the spread of misinformation? As part of our central commitment to building healthier communities and a stronger democracy, Shasta Scout explains why we’re all susceptible to “information disorder” . . . and how we can fight back.