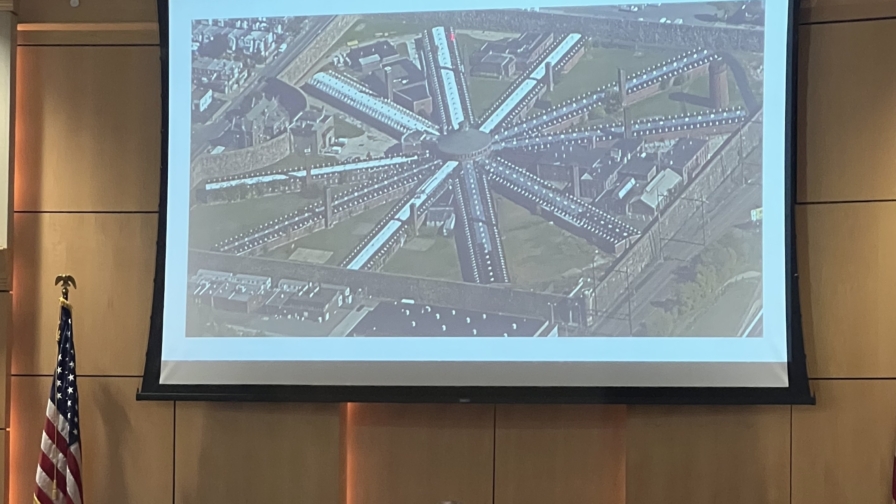 This visual was used to depict the "hub and spoke" model being proposed as a new jail facility for the county.
News: Accountability

The “hub and spoke” style facility would include rehabilitation services integrated within a large county detention facility. The plan is designed to provide increased accountability for those who are unhoused or facing mental health or substance use issues within the county, top leaders said. Supervisors were divided on the approach but expressed interest in learning more at future meetings.

During a Tuesday evening meeting of the Shasta County Board of Supervisors, three top Shasta County leaders took turns sharing their coordinated plan for a large new county detention facility they’re referring to as the Corrections and Rehabilitation Campus (CRC.)

The proposed jail is a new iteration, now-Sheriff Michael Johnson said, of a similar idea he suggested several years ago in response to a county plan to build a low-barrier shelter. As he did then, Johnson is proposing combining expanded rehabilitation services within a much larger detention facility. The plan, he said, would ensure that people who are arrested in connection with their lack of housing, mental illness or substance use issues would take the services they are offered by the county or be forcibly kept off the street.

Assistant County Executive Officer and former Sheriff Eric Magrini emphasized that the new facility would respond to changes in California laws that require incarceration to include a heavier focus on rehabilitation. Presenting a slide with what he referred to as “rhetorical questions,” Magrini emphasized that the county already knows what the central problems in public safety are and has the resources to meet them.

He noted a lack of jail beds as the most urgent problem in addressing public safety but also acknowledged that he is unsure how many new jail beds may be needed. Many in the community are concerned about what they refer to as the “revolving door” at the county jail, a pattern of frequent arrests followed by quick releases of those charged with low-level offenses related to substance use, mental illness, or living unsheltered.

The new facility would resemble a wagon wheel with a hub and spokes, Johnson told the audience. Different “spokes” of the building would serve different populations, he said, including spaces dedicated to those who have been living without shelter, or are facing substance use issues. Johnson presented a tough line on accountability during his presentation, saying, “I will have plenty of spokes for those not willing to commit to their own recovery” and suggesting that those who do not wish to rehabilitate or be incarcerated should leave the county if they don’t want to be harassed.

The plan, which is currently estimated to cost $120 million and is likely to take many years to design and construct, would require buy-in from a number of county agencies and community partners, Johnson said. County Chief Executive Officer Matt Pontes made clear in his presentation that he supports the proposal and would work to execute it. No clear plan for how to fund both the building and ongoing management of the jail facility was provided. Lack of funding to run expanded jail facilities has previously led the county to return state funding for jail construction.

The detention facility plan focuses heavily on criminal accountability, normally a popular idea in Shasta County, but public comments in response to the proposed facility were overwhelmingly negative. Many community members focused their remarks on how long it would take to design and build the jail, and how it would be funded, calling on supervisors to provide accountability for criminal behavior more quickly than such a complex plan would allow.

Supervisors were split in their responses to the proposal. Joe Chimenti and Mary Rickertt strongly supported the plan, touting it as a means of increasing accountability and decreasing recidivism, while Garman remained neutral on the proposed idea, encouraging the community that the plan includes “some great ideas” and continued discussion is needed.

Supervisor and Board Chair Les Baugh took a middle line on the proposal, saying he’s “absolutely in support” of a jail, with rehabilitative services included, but “as to what that jail looks like I don’t think anyone in this room knows.” Supervisor Jones presented the strongest opposition to the proposal, expressing disappointment that the project is much larger, more complicated, more time consuming and more expensive than the simpler jail facility he believes the public wants in place as soon as possible.

No formal vote was taken, but supervisors gave their unanimous verbal agreement that the Board agree to learn more about how the county can work towards a new jail facility in future meetings.

Do you have a question or comment? Email us, or join the community conversation at Shasta Scout’s Facebook page. Do you have a correction to this story? Submit it here. You can contact the author of this story at [email protected]

Across California, gas prices are soaring. That matters to everyone, but it matters more to those who have less disposable income, including many in Shasta County.

Shasta Scout is organized around principles and processes that encourage our readers to become our collaborators in the production of local news. We’re also working to increase trust in the news by breaking down barriers between journalists and the public. As part of that process, we’re about to open our notebooks to members.