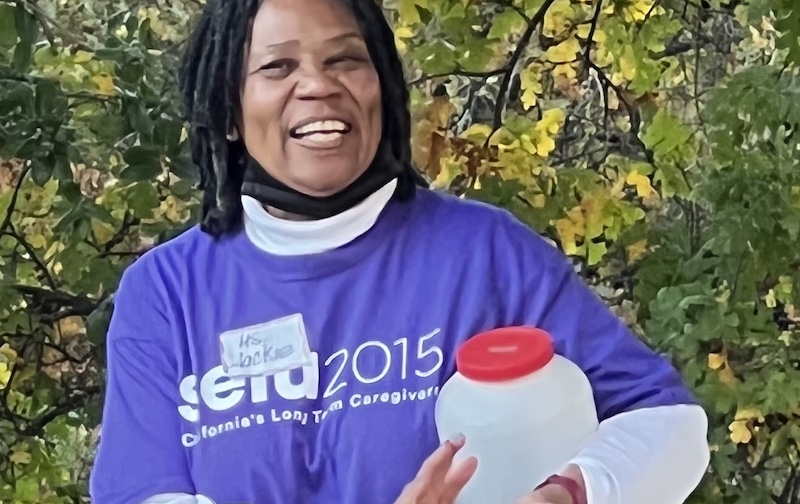 She’s one of 2,700 IHSS providers in Shasta County caring for some of the 3,600 individuals who qualify for services in Shasta County because they are aged, disabled, or for other reasons cannot remain in their homes and care for themselves without support.

On October 30, SEIU 2015 providers, clients, and families gathered by the Sundial Bridge. They were there to celebrate their work with music and tamales and to advocate for improved wages and benefits. SEIU 2015 is currently negotiating with Shasta County for a salary increase.

Speaking to the gathered crowd, Morganfield described her in-home care responsibilities for her daughter, who has two complex medical conditions, and the pay she receives for her care. “I provide paramedical services that include administering medications, giving injections, blood and urine testing, wound care, catheter care, ostomy irrigation, dialysis treatments, respiratory treatments,” Morganfield said, “and all of this for $14.60 an hour.”

As her daughter’s in-home care provider, she says she also loses her income source each time her daughter is not at home because she’s hospitalized, including the last time, when she was hospitalized for three months.

She told the crowd that inherent dignity and respect include being paid a living wage. “We keep our loved ones safe, at home and out of institutions,” she said, “We lower the incidence of abuse. We do more than home care, we do healthcare. But people who work in fast food make more than we do.”

Madelynn Clark, an SEIU care worker who also spoke at the event, called long-term caregivers essential workers, saying: “We take on responsibilities comparable to nurses’ aides, hospice workers, counselors, physical and behavioral therapists . . . we may work long, even unpaid hours and lose sleep for the concern of others because we have compassion, empathy and a heart for others. We definitely don’t do it for the paycheck. However,” Clark said emphatically, “a paycheck is important.”

The Living Wage Calculator provides estimates by county for how much individuals need to earn to afford basic living expenses including food, housing, medical care, child care, transportation and taxes. In Shasta County, the tool indicates that a living wage is $13.97/hour if the individual is providing only for themselves but increases exponentially when the person is providing for one or more children.

Salaries for IHSS workers vary by county. SEIU 2015 recently won a pay raise in Lake County of sixty-five cents over minimum wage, bringing workers’ hourly wages to $14.65. In Shasta County, where the IHSS base wage rate is currently $14.60, recent labor negotiations have yielded an offer of an additional twenty-five cents an hour over minimum wage, according to Arnulfo De La Cruz, an Executive Vice President of SEIU 2015. The union is pushing for more.

De La Cruz said increases in IHSS wages would be an investment in Shasta County’s economy because a relatively small percentage of IHSS wages are paid for by the county, with the rest of the funding coming from state and federal sources. He says by increasing the wages of their largest publicly funded workforce, Shasta County can stimulate new local spending and economic growth.

While levels of care vary depending on the needs of in-home clients, some IHSS workers provide significant levels of support that include a number of skilled tasks. For those clients who would require institutionalization without in-home care, the state of California has said IHSS care providers represent a significant cost savings to taxpayers.

The Shasta County In-Home Services Public Authority, which is composed of the members of the Shasta County Board of Supervisors, will meet on Tuesday, November 16 at 9 am. The meeting will include an open, public comment period at 9 am before moving to a closed-session meeting for negotiations with SEIU 2015.

An 1851 drawing of Redding's riverfront land by Henry B. Brown.

A Glimpse Into History: How Redding Acquired Riverfront Land

As Redding considers selling riverfront land for redevelopment, news archives from the 60’s and 70’s provide insight into how the city became owners of the land. Another public workshop on the possible sale and redevelopment of the land will be held tonight.

Engaging the Community in Proposed Riverfront Development: How It Started, How It’s Going

A series of public workshops, surveys and social media posts by the city haven’t reassured many community members that they’re being included in the riverfront planning process. Shasta Scout looked at how the city’s process compares with best practices in community engagement.